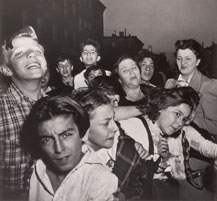 With privileged access to emergency calls and line-up rooms in Manhattan, Weegee, like some sort of superman, would magically appear wherever there was a crime. Often becoming the story himself. Snapping a burglar arrested in front of a candy store, the headline ran: "Police Report: Weegee Covers an Arrest and a Fire." At a time when mobsters and crime seemed glamorous, Weegee was taken in as well, often donning a fedora with a cigar hanging from his tough-talking mouth. Later, though, as the exhibit shows, he became more mordant in his sensibilities, renaming his 1941 newspaper image Brooklyn school children see gambler murdered in street to the new title, Their first murder. Remove your $7 parking fee and let the visual orgy begin.