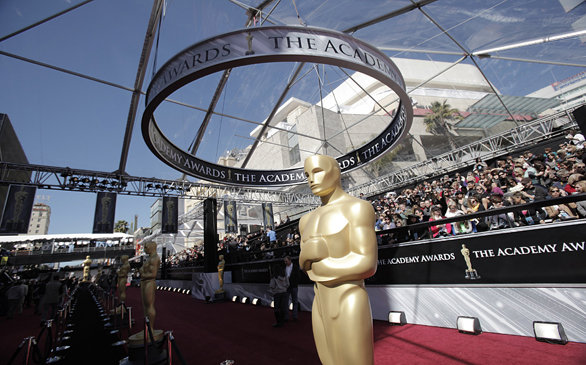 The red carpet at the 83rd annual Academy Awards.
(Credit: Francis Specker/Landov/MCT)
Comedies are often the most talked-about movies of the year, but even the good ones are often overlooked when it comes to awards season. Hoping to buck the trend is Bridesmaids, the raunchy, female-driven ensemble that racked up close to $170 million at the box office this summer, spawned a slew of copycat scripts and served as a touchpoint for a women-in-comedy discussion.

The film received an unexpected boost Wednesday when it received two nominations from the Screen Actors Guild - one for performance by a cast and a supporting female actor nod for Melissa McCarthy. The filmmakers are hopeful it’s the beginning of a road that leads to a best-picture Oscar nomination from the Academy of Motion Pictures Arts and Sciences.

“It’s a film that made both people laugh and that they thought about later. That’s a rare combination and it’s something to celebrate,” said Tony Angelotti, Universal Pictures’ campaign consultant.

SAG nominations are often a strong predictor of the Oscar race, in part because actors make up the largest branch of the academy. Yet Oscar voters typically like their comedy leavened with some drama - such as in “The Kids Are All Right and Juno. Should Bridesmaids land a best picture nomination, it would be one of the few studio comedies with big, laugh-out-loud set pieces to do so. “Bridesmaids” producer Judd Apatow has long suggested the academy establish a best comedy category.

“It would add a lot to the show and there are a lot of people who deserve recognition but probably will never get it unless there’s a comedy category,” he said. “We don’t always have to take ourselves so seriously.”

Until that time comes, Universal will push Bridesmaids for the best picture race. The studio launched its campaign for the film after it caught fire with audiences in May. The academy hosted an official screening at its headquarters this summer, screeners of the film went out to awards voters this week, and advertisements touting the film have already been purchased.

The spending will likely now be ratcheted up a notch as the studio anticipates a Golden Globe nomination Thursday - the Globes have a best comedy category - and possible recognition from the Writers Guild in January. Although the film’s chances of winning an Oscar remain slim, admittance into the best picture race would be a seen as a significant achievement.

“As anyone who tries to make a comedy will tell you, it’s very difficult to tell a really interesting story that has all the human emotions and reactions and is often funny,” said Apatow. “Even the silliest comedies are a miracle when they work. I’ve always been of the school that I think it’s just as hard to make Young Frankenstein as Lawrence of Arabia, and they are both of equal value to me.” (c)2011 the Los Angeles Times Distributed by MCT Information Services