(The Weinstein Company)
By Nick Golden 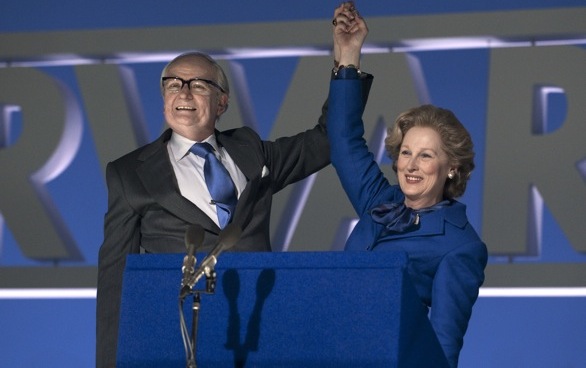 Jim Broadbent as Denis Thatcher and Meryl Streep as Margaret Thatcher in The Iron Lady
(Credit: Alex Bailey. Courtesy of Pathe Productions Ltd/The Weinstein Company)
The Iron Lady is the story of Margaret Thatcher. For those who need a reminder, Thatcher was the UK’s first female Prime Minister. Her confidence and absolute refusal to keep quiet about the things she believed in were perhaps the most notable things about her. Unlike most politicians today, Thatcher did not care about polls and the opinions of her colleagues. She only cared about doing what was best for the future of her country. Though she endured many hardships, Margaret’s legacy will undoubtedly live on for many years. However, what The Iron Lady seeks to do is show a more personal side of Margaret Thatcher.

The film focuses on a present-day Thatcher (Meryl Streep), who is now living under the constant watch of her caretakers. We follow her through her every day life – watching as she autographs books, sneaks out of the house to buy milk and has breakfast with her husband, Denis (Jim Broadbent), who has been deceased for eight years. The audience is treated to a view into the nature of Margaret’s past and present struggles.

She is haunted daily by the memory of her dead husband, who serves the driving force behind the story in the film. Denis is a constant reminder of her past, and as such, he triggers a series of brilliantly executed flashbacks that inspire sympathy and understanding from the viewer that may not have been so easily provoked from those who were around during the real Margaret Thatcher’s time in office as Prime Minister.

Audiences who are familiar with Streep’s previous work will not be surprised by her outstanding performance as Margaret Thatcher, but it should be noted that her work on The Iron Lady is truly extraordinary. She, as well as the rest of the pitch-perfect cast, will undoubtedly capture much well deserved Oscar buzz for their impressive achievements in their roles.

Phyllida Lloyd’s flawless direction, combined with superb acting, allows the audience to connect on an emotional level with one of the most influential woman in political history and those who stood beside her along the way. The Iron Lady will remind viewers that behind every public figure, there exists a person who is just like the rest of us – a person who can also experience love, pain and loss; and perhaps this film will encourage a sense of compassion in all of us for our fellow man (or woman).