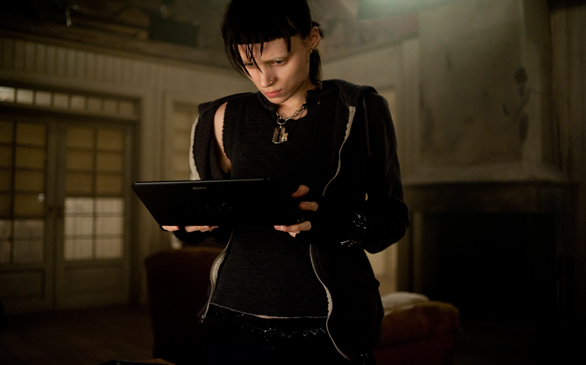 (Credit: Sony Pictures)
It couldn’t be further from the conventional period drama with the nipped-waist bodices and ostentatious accessories that frequently garner award-show attention for costuming. Nonetheless, The Girl With the Dragon Tattoo, the American film based on the first book of Stieg Larsson’s popular Millennium trilogy, is likely to attract some attention with its hard-hitting looks that reflect a darker side of contemporary street fashion.

The producers of the film, which opens Dec. 20, put together a style dream team to transform actress Rooney Mara into Lisbeth Salander, a waifish, goth-punk heroine who becomes an unlikely ally for a journalist involved in a twisted mystery.

“The thing that stood out was how tiny she was, but she also has this ferocious velocity about her even though she’s so slight,” Summerville says about the Salander character. The designer worked to make Mara look as thin and asexual as possible, pairing pieces so the character’s silhouette is tight at top and loose at the bottom. (Salander walks the streets in fitted leather biker jackets, drop-crotch cargo pants and plenty of piercings.) “I wanted her to have this external shell like a protection around her,” Summerville adds.

Mara portrayed a college student who looks like the girl next door in the 2010 film, The Social Network, and Summerville says the strawberry-blond actress was open to a dramatic transformation for “Girl.” “Her face has such a striking bone structure,” Summerville says. “She has a long thin neck and intense eyes. You can do anything to that face.

“Her look (as Salander) is very animalistic,” Summerville says. “Her strength is unexpected.”

Summerville tapped a couple of L.A.-based designers for the character’s signature leather jackets. Cerre, a company that has just taken over the old Costume National space on Melrose Avenue as its new atelier, created one of the jackets as well as a leather backpack. The other jacket was made by Agatha Blois, who has designed custom leather pieces for Aerosmith and Sheryl Crow. Summerville aged and distressed the jackets (and most of the Salander wardrobe) to give them a well-worn feel true to the punk-influenced character. The jackets are accompanied by layers of thermal shirts and pants as well as fleece hoodies, which makes for a drapey, cloaked silhouette _ adding to the character’s mystery.

Other pieces worn by Salander, such as jeans, thermals and torn T-shirts, were pulled from mass-market brands including Sweden’s H&M, Germany’s Closed and the British label All Saints. The chunky leather moto boots were made by Belstaff as well as Fiorentini and Baker. Summerville also dressed her unconventional heroine in custom-made sneakers to convey a sporty-streetwise sensibility.

The worn-in, rough-and-tumble pieces provided inspiration for Summerville’s collection for H&M, which went on sale Dec. 14. The line contains several pieces that are replicas of (or inspired by) items featured in the movie, including a leather jacket and waffle thermals. Other garments _ black skinny jeans and muted colored hoodies _ were designed to convey the brooding darkness of the Salander character.