What In the Dickens?: Occupy-ed With a Radical New 'Christmas Carol' 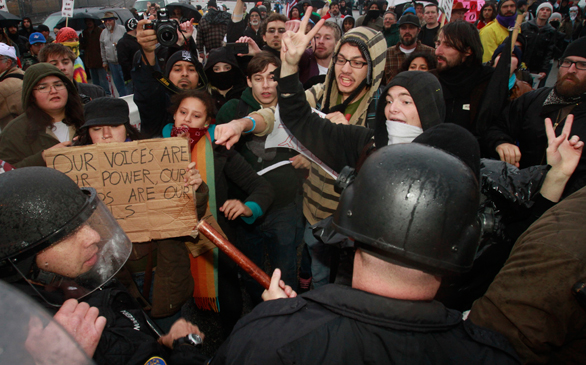 Truth be told, it wasn’t much of a stretch to place Charles Dickens’ Victorian classic into today’s Occupy world. And that, as Sullivan would be the first to tell you, is exactly the point. Dickens’ novella was written in the heart of the “Hungry ‘40s,” a time of labor unrest, unemployment and starvation across 19th-century Europe. The gap between rich and poor was wide - and getting ever wider.

The Cratchits as depicted by Dickens “are an example of where most people actually are today,” said Sullivan, who has spent the last 23 years with the Tony Award-winning theater group, which specializes in political satire and annoying the powerful.

As the 200th anniversary of Dickens’ birth approaches in February, “A Christmas Carol” has become “the closest thing to a modern myth that we have,” said John O. Jordan, a professor of literature at the University of California, Santa Cruz.

So it seems perfectly natural that a group like the San Francisco Mime Troupe (mime as in mimic, not pantomime) would want to adapt what Jordan called Dickens’ “radical political statement,” albeit one that’s tied up in Christmas ribbon.

After all, everyone else has.

The slender novella was first popularized in the United States as a radio play during the Great Depression. In Dickens’ tale, the miserly Scrooge is visited on Christmas Eve by his dead business partner and the ghosts of Christmas past, present and future.

He sees visions of his lonely childhood, the wasted promise of his young manhood and his eventual death - wealthy but unmourned - and vows to be a better, more generous man if only given a second chance.

Since then there have been all-black Christmas Carols and a western version hosted by Ronald Reagan. In Rod Serling’s iteration, Scrooge envisioned a nuclear Armageddon.

Yosemite Sam played the miser in Bugs Bunny’s Christmas Carol. Oscar the Grouch did a similar star turn. The tale has been squeezed into “The Six Million Dollar Man” and “The Odd Couple”. There have been Klingon adaptations and zombie versions, ballets, musicals, films and operas.

But the idea for Sullivan’s production “is even better,” said Jonathan H. Grossman, associate professor of English at UCLA, because “it will speak right to Dickens’ main concern - the limitations inherent in modern capitalism - for a new time.”

That is, if it ever gets performed.

Sullivan’s dream is to stage a reading for a genuine Occupy audience. Unfortunately, ever since the playwright began trying to harness the classical tale for the modern protest movement, the police have moved faster than his muse.

The script is finished, and Sullivan is in the process of casting - not an easy task on short notice during the holidays, especially since Bob Cratchit has to play guitar and someone must be proficient on concertina.

And with Christmas coming, actual encampments are few and far between. Sullivan reached out to Oakland (shut down Oct. 25 and again on Nov. 14) and San Francisco (raided by authorities this month). Last Wednesday, he got in touch with New York City’s Working Theater for a possible reading at Occupy Wall Street, the movement’s ground zero (dismantled before Thanksgiving).

He wanted to stage the show for Occupy members for many reasons, not the least of which was that hanging around in a drafty tent bearing witness to America’s income inequality can get a little boring. And no matter how open-minded the Mime Troupe’s audiences are, he said, “I’m sure a bunch of them have never been to an Occupy camp.”

The production also provided a way for the 51-year-old Sullivan, who embraced activism at a young age, to stand in solidarity with the Occupy protesters. When he was 6 years old or so and living in Los Angeles, Sullivan said, he went with his parents to a protest against then-President Lyndon Johnson. They brought their pet rabbit to show that they were a “peaceful family” - and ended up in a parking lot tree when they realized they couldn’t outrun the police officers in riot gear.

“Through ‘A Christmas Carol,’” Sullivan said, the Occupy protesters can see that they are “an important new part of the struggle. ... I want to say this is a continuation of something, and, hopefully, maybe, we’ll win.”