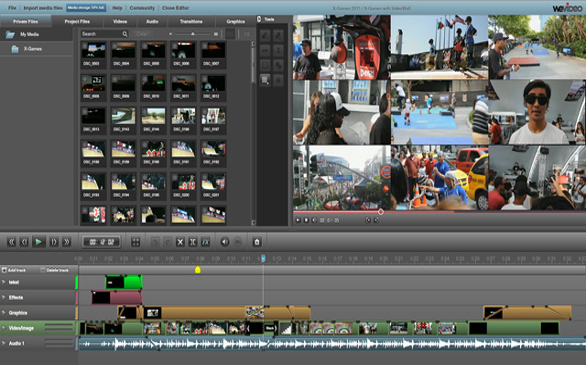 That is the vision of WeVideo, a new online video editing startup, based in Sunnyvale, Calif., that says it is the first company to offer a video editing platform in the cloud as powerful as many desktop editing tools. WeVideo, which has versions ranging from free to $60 a month depending on the amount of video you want to edit and share, allows people to edit within their Web browser _ to splice video clips, add audio and weave in visual effects to create the kind of polished video that previously required sophisticated and pricey software like Apple’s Final Cut Pro.

Sharing and watching online video has become a mainstream activity. About seven out of 10 online Americans use video-sharing sites like YouTube and Vimeo, according to the Pew Internet & American Life Project, while YouTube says it receives 48 hours of video uploads each minute. But while hundreds of millions of people now carry smartphones equipped with video cameras, relatively few have the tools to edit raw footage into something polished and creative.

WeVideo, which developed the first versions of its product in Norway as an educational tool for European schoolchildren and has tried to retain that simplicity and intuitive use in its online video software, hopes to change all that.

“Our ultimate goal is to become the most widely used video editing platform in the world,” said Jostein Svendsen, CEO of WeVideo. “It’s a big goal for a small startup, but we think we can achieve it.”

By using the “cloud” where the heavy computing work of video editing is distributed across vast server farms owned by Amazon, rather than on an individual computer WeVideo also allows people in different places to collaborate on a video. And once your video is complete, you can post it almost instantly on Facebook, Twitter or YouTube, without a lengthy upload.

WeVideo, which has attracted more than 100,000 users since its Sept. 13 launch and hopes to hit 1 million by the end of its first year, is hardly the only startup trying to use the cloud let people make and share art. Another is Mixel, an iPad app launched Nov. 10 that allows users to create their own digital collages, or to “remix” the creations of others.

“I realized that if somebody could create a social art-making experience, you could turn tens of millions of people into artists who didn’t think of themselves as artists,” said Khoi Vinh, the former director of design for The New York Times’ website, who is co-founder and CEO of Mixel.

Mixel is social on two levels: You can share what you create on Facebook, Tumblr or other social networks, and you also can share the process of creating images. Each component of each collage is part of a shared online database that can be used by other Mixel users. Users also can remix the collages of others by adding their own images, drawing from their photos on Facebook or other sources, to create a “thread” of collages that evolve as they move through each user’s iPad.

“The tool is really, really simple _ almost primitive _ so people would just focus on getting collages done, not on being super perfectionists,” Vinh said. “But even as primitive as they are, we’ve noticed that people have found new ways of making collages that are shockingly good.”

Simplicity, collaboration and sharing are also key to what WeVideo is trying to do.

-What it is: A full-feature video editing tool that runs in your Web browser.

-Cost: Four introductory subscription models: free, $4.99 a month, $29.99 month or $59.99 a month, depending on image quality and the amount of video you want to store and export to destinations like Facebook and YouTube.

‘Portrait of a Lady on Fire’ a visual, meditative masterpiece
236 views

Controversy aside, ‘Joker’ is all setup, no punchline
322 views

‘Joker’ has finally arrived. Here’s a guide to all the drama it has stirred up
343 views

Anthony Bourdain left behind a documentary series about Detroit. But will it be seen?
555 views

From a brilliant field of cinematography Oscar nominees, a critic chooses his ‘Favourite’
627 views