Matt Barkley: Barkley Will Return to USC for Senior Season 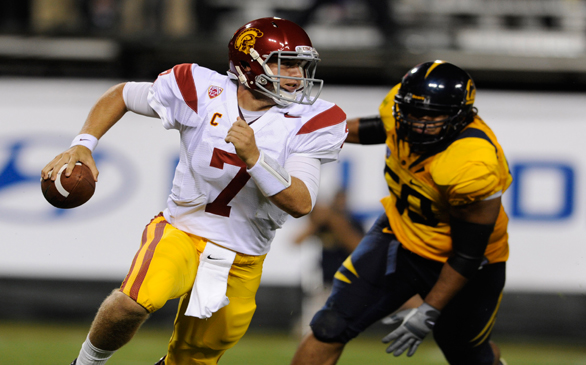 Barkley made the announcement in front of a Christmas tree and flanked by six Heisman trophies during a packed news conference at USC's Heritage Hall. Barkley, a three-year starter and team captain, led USC to a 10-2 record this season and was projected as a top pick in the April draft. He finished sixth in balloting for the Heisman Trophy.

Barkley, 21, made his decision after consulting with coaches, former players, NFL personnel and agents and family and close friends.

Barkley established a Pac-12 record this season by passing for 39 touchdowns. He also set a school record for completion percentage and single-game USC records for touchdowns, completions, passing yardage and total offense.

Barkley was the last of four prominent USC juniors to announce his decision about their futures.

Barkley's news conference marked the third time since 2005 that a Trojan quarterback held court in Heritage Hall to announce a decision about returning or turning pro.

In 2005, Matt Leinart said he would return to USC, drawing cheers in a packed lounge. In 2009, Mark Sanchez announced he would enter the NFL draft, creating an awkward scene with former coach Pete Carroll, who said publicly that he disagreed with the decision.