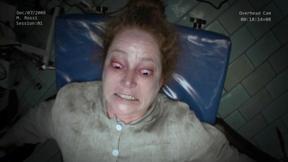 In an age where POV (point-of-view) horror movies like Paranormal Activity and its two sequels rule the box office, one might come to expect a few imitators looking to ride on their coattails.

In The Devil Inside, a young woman named Isabella Rossi (Fernanda Andrade) is looking for answers. Her mother, Maria Rossi (Suzan Crowley), murdered three people during her own exorcism and was later transferred to an insane asylum in Italy. Isabella wants to know why, and in an attempt to find these answers, she inexplicably hires a cameraman to film her foray into the world of demons.

The film begins on the night of Maria’s exorcism. After several cheap scares, we are on our way to Italy with Isabella. When she arrives, her plan of action is to attend what seems to be a sort of school for exorcism. Classrooms full of priests watch videos of previous exorcism attempts and analyze whether or not the victim of alleged demonic possession is actually possessed or just mentally unstable.

Isabella befriends two priests from the school, who seem all too eager to give the Catholic Church what-for. After seeing her mother, they decide to take Isabella to an illegal exorcism in order to prepare her for what’s to come.

This is where the film seemed to jump the tracks.

The exorcism takes place in a tiny basement somewhere in Italy. Isabella’s cameraman has somehow attached cameras to every surface in the room (including the ceiling). When the priests begin the exorcism, the possessed girl begins shouting insults and threats, à la The Exorcist. But in this film, the insults come off as funny rather than frightening. After several more minutes of ridiculous attempts in grossing out the audience (menstrual blood splattering onto the camera lens included), the exorcism ends.

Since the first exorcism went so well, Isabella and the priests decide to perform an unauthorized exorcism on Maria Rossi, which sets the film up for its all-too-abrupt ending.

Character development is non-existent, and the pace ruins any eerie feeling the movie may have had if this film had been properly edited. The second half is suspenseful, but it does not make up for the fact that the The Devil Inside is, quite simply put, not scary. Gone are the days where moviegoers would leave theaters with a feeling of dread and paranoia after a horror movie. The only thing the viewers will be left with after they watch The Devil Inside is a feeling of disappointment.

The Devil Inside releases in theaters Jan. 6.