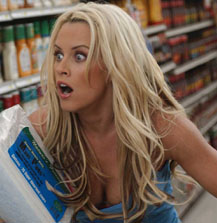 Since 1995’s "Singled Out," former Playmate of the Year Jenny McCarthy has made a name for herself by being that buxom blonde who’s not afraid to be unladylike in public. But as anyone who has followed the 32-year-old’s career knows, there’s much more to this model-turned-actress than simply crazy behavior and fart jokes.

With McCarthy’s latest project, Dirty Love, fans will get to see the more serious side of Jenny McCarthy. Although at first glance the movie looks like just your typical McCarthy vehicle – Love showcases the ex-MTV host as the gorgeous, goofy and gross Rebecca, a woman on a chaotic quest for true love after her wonderful boyfriend turns out to be nothing more than just another playboy – McCarthy demonstrates the dedicated businesswoman she’s become by also writing and producing the film. In fact, Dirty Love was originally a TV series McCarthy wrote to showcase women in a comedic light, but it was deemed too edgy for network television. So, McCarthy turned it into a feature-length script.

"I think it was the dialogue," McCarthy says. "It was very much like ‘Sex and the City,’ but on network television. There was a lot of talk about guys wanting their penises to experience uncharted waters."

Directed by McCarthy’s soon-to-be ex-husband John Asher (McCarthy filed for divorce from Asher in late August), Dirty Love premiered at the 2005 Sundance Film Festival to a standing ovation. McCarthy received a call from the president of Sundance saying he wanted to air the film during the prestigious event because he had "never seen a woman do those types of things onscreen." "Those things" include a menstruation scene where McCarthy’s character is seen frantically racing through the aisles of a supermarket bleeding all over herself and leaving behind pools of blood on the linoleum floor. It is scenes like this that reunited McCarthy and Asher on the set (the two met on the set of 1999’s Diamonds) with the common goal to bring back funny female leads in Hollywood. And despite recent events, McCarthy says it’s not a working condition she would rule out in the future.

"John is an amazing director, but I don’t think I could work alongside him again unless it was something I didn’t write," she states. "I had such a clear vision on what I wanted this project to be and, as a director, John had the right to make it his own. It got ugly at times. Luckily, though, we had this thing – "911" – where if I said it he knew to let me have this and he could have the next thing. When I watch the movie now I’m glad I listened to him when I did, and I’m glad he listened to me when he did."

Collaborating with her husband wasn’t the biggest challenge for McCarthy during Dirty Love’s production. During the second week of filming, the movie lost $1 million worth of funding. McCarthy had to find the money within four hours to keep the production on schedule and says she was "never so stressed out" in her life. Although everything worked out in the end, McCarthy doesn’t plan on working as a financier again anytime soon.

While McCarthy waits to see what audiences nationwide think of Dirty Love, she’s returning to writing, with plans to release her fourth book, titled Life Laughs, in the near future. The book, which follows her New York Times Bestsellers Belly Laughs and Baby Laughs, will focus on "men, sex, food and vanity" and, according to McCarthy, is the best book in the series yet. As for whether or not she plans on writing any more scripts –

although McCarthy admits she already has four more screenplays in the works – she plans on focusing on her number one job, motherhood, while she waits to see how Dirty Love performs at the box office.

"If the movie does well then I can make my other projects properly," she says. "So I’m going to hold off on my other scripts for now and test the waters. But I have good faith in the film."

No matter what, though, McCarthy hopes that Dirty Love proves to audiences that females in Hollywood can be beautiful and funny. While other ex-Playmates are just trying to be taken seriously in the entertainment industry, McCarthy is trying to open up doors for actresses everywhere by getting some laughs.

"I’m not a serious actress," she states. "Comedy is a lot harder than drama – I mean, what Playmate do you know is funny?"