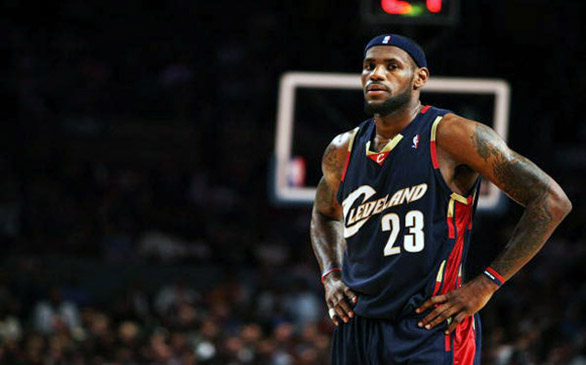 MIAMI - Maybe there is something to this “I’m a new man” thing LeBron James has been touting since before the season started.

A cynic would say - and who around LeBron James isn’t a cynic these days - that it was merely a convenient excuse for LeBron to say he was approaching the game incorrectly, and it’s what caused him to fail in the most crucial of moments.

What does it matter if you’re happy or stressed when you have got Jason Kidd on your back and you still decide to shoot a step-back jumper rather than take advantage of your size? Basketball instincts should take over there, anyway. And even his own head coach constantly complimented his team for being able to compartmentalize all of their issues and focus on basketball when necessary.

It would seem, then, that the whole “I’m back to my old self” routine was just a theme for this season that helps LeBron deal with the frustration of last season. But then Saturday happened. That’s when LeBron popped the question to his high school sweetheart and the mother of his two children, Savannah Brinson. It’s safe to say he wouldn’t decide to tie the knot after about a decade with Brinson if he wasn’t in a good place.

And then Sunday happened. Not the game against the Bobcats - a team with literally the worst roster in the league that, in hindsight, had absolutely no business being within a bucket of beating the Heat four days earlier. It was after the 39-point win, when LeBron was discussing his engagement and, again, his new mind-set. There was a genuine feel to what he was saying - as genuine a feel as you can get coming from a player who has been trained to deal with media since his early teens.

It wasn’t just about the engagement, which he described as “real cool,” leaving the details of the event for others to unearth.

LeBron also reiterated just how settled he is now compared to last year.

“This is a good point in my life right now,” he said. “I’m very excited about both on the court and off the court.

“I’m a totally different person than I was last year.” As defiant and defensive as he was last year when facing the constant criticism and investigative eye of a sports world seemingly determined to see him fail, he never admitted that any of it got to him.

He didn’t apologize for his “Decision” decision for months - when he wanted to, not when others wanted him to. And he didn’t help his image with his postseason remark about common folks essentially wishing they were him despite his team’s loss in the NBA Finals.

So when LeBron openly, and almost unsolicited, admits Sunday that last year was an “overwhelming” experience for him, it tends to lend credence to his new approach and what it could mean for him.

If he is, indeed, in a better place, it probably can’t help but translate onto the court.

Through a franchise-best 5-0 start for the Heat, no one has played better than LeBron. He’s keeping his approach simple but effective, and he’s looking like the beast of a basketball player that he is. It’s natural, not forced.

And maybe that’s exactly what he’s getting at. If it feels right, do it. Everyone has long known that LeBron has the best combination of talent and physical gifts of any player in the league. So when he just plays to those strengths, he’s bound to look like, by far, the best player in the game.

And there has to be a trickle-down effect for his team. There aren’t 14 other players trying to win it for LeBron this year. They’re more like 14 players trying to win it with LeBron. It’s a lot more fun that way. So when events like Saturday night happen for LeBron, it’s difficult not to start buying into the benefit of all these positive feelings.

“It was a good night,” said Dwyane Wade, who was in charge of holding the engagement ring all night. For those insisting on details, Wade offered a few. He basically called it the no-look pass of wedding proposals.

“He tried to kind of catch her off guard,” Wade said. “He kind of caught her in a moment, right after we all did the countdown, when everyone was saying ‘happy new year, happy new year,’ then he got her.

“To me, it felt like he was on his knee for an hour. It was probably like 35 seconds.”

How many heartfelt stories did you hear about LeBron James last season? Not a single one comes to mind when you have all those negative stories to sort through. Maybe there is a tangible effect to all of this. Maybe finding the proper perspective after a year where perspective didn’t exist around this team will actually settle LeBron down when those intense basketball moments arise again.

Only another trip to the Finals will actually provide an answer. But as of Sunday, it feels about as real as it gets.