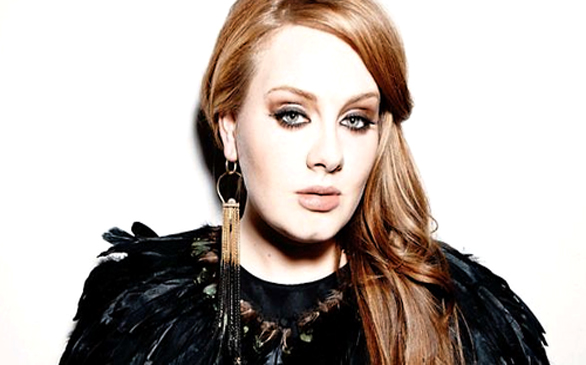 Adele
To the surprise of virtually no one, Adele's 21 is officially the top-selling album of 2011, with a final tally of 5.82 million copies, while the British soul singer's single "Rolling in the Deep" was the year's bestselling song with 5.81 million copies, according to Nielsen SoundScan's year-end sales report issued Wednesday. Adele's album entered the chart at No. 1 in February and has never dropped out of the Top 10. This week marks the CD's 14th nonconsecutive week as the nation's top-selling album. Michael Buble's latecomer holiday entry Christmas was the No. 2-selling album of the year with nearly 2.5 million copies, followed by Lady Gaga's Born This Way (2.1 million), Lil Wayne's Tha Carter IV (1.9 million) and Jason Aldean's My Kinda Party (1.6 million). Industry wide perhaps the best news in the year-end figures is that album sales increased over the previous year for the first time since 2004, up 1 percent to 330.6 million units, compared with 326.2 million in 2010. Overall music sales, including albums, singles, music video and digital tracks, increased nearly 7 percent in 2011 compared with a year earlier, surpassing 1.6 billion units for the first time since Nielsen SoundScan began tracking retail sales in 1991. "There's certainly more good news than we've had in the past six years," said Dave Bakula, senior vice president of analytics entertainment for Nielsen SoundScan. "It's due to a lot of things that are going on out there. "It's easy to talk about numbers when you've got an album like Adele's 21 driving the industry for 45 of the 52 weeks of the year," he said. "Her numbers are amazing: she's sold more albums than anyone since 2004. Having an album like that out there drives a lot of interest on a weekly basis." Nielsen SoundScan, however, tracks unit sales, not dollar figures, making it harder to determine whether revenue continued its downward trend in recent years. One of the big stories of the year was Amazon.com's decision to sell Lady Gaga's Born This Way for 99 cents as part of a promotion for its cloud music service, significantly helping the collection log sales of more than 1 million copies during its first week of release. "Sales by some of the big box retailers had lower prices than we've ever seen in the past and that did create some downward pressure on pricing," Bakula said. But you can look at the Top 100 or even the Top 200 on iTunes and find nearly all of those being sold for $1.29 as compared to the standard price of 99 cents for a digital download in years past. "We're also seeing more deluxe and super deluxe editions of albums, and those are selling for higher prices. I can't say anything more than anecdotally, but I've got to think that digital pricing is drifting upward," Bakula said. The strength of the digital music component also was reflected in a nearly 20 percent jump of digital album sales from 2010 to 2011, which helped offset a 5.7 percent drop in sales of physical albums for the same period. Last year was the first in which any song registered more than 5 million paid digital downloads, a feat accomplished by Adele and LMFAO. Digital albums, including "track equivalent albums" (a category that counts 10 individual digital tracks by an artist as an album), for the first time constituted more than half of all album sales, at 50.3 percent, a number Bakula called "the digital tipping point." Rounding out the Top 10-selling albums were Mumford & Sons' Sigh No More (1.4 million), Drake's Take Care (1.3 million), Justin Bieber's Under the Mistletoe (1.3 million, just 2,000 copies behind Drake's album), Jay-Z and Kanye West's The Throne (1.2 million) and Lady Antebellum's Own the Night (1.2 million, about 30,000 copies behind The Throne). The remainder of the Top 10 digital songs behind "Rolling in the Deep" are LMFAO's "Party Rock Anthem" (5.5 million), Katy Perry's "E.T." (4.8 million), Maroon 5's "Moves Like Jagger" (4.1 million) and Pitbull's "Give Me Everything" (3.9 million). At No. 6 was Foster the People's "Pumped Up Kicks" (3.8 million) followed by Adele's "Someone Like You" (3.8 million), Cee Lo Green's "Forget You" (3.7 million totaling the explicit and clean versions), Nicki Minaj's "Super Bass" (3.6 million) and Lady Gaga's "Born This Way" (3.5 million). (c)2012 the Los Angeles Times Distributed by MCT Information Services
Article posted on 1/5/2012
This article has been viewed 1762 times.