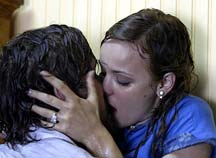 Love, passion and utter devotion are the only words to describe the romantic tale of The Notebook. The film begins when a man (James Garner) in the present day reads a story about two lovers from a worn-out notebook to an Alzheimer’s patient (Gena Rowlands) in a convalescent home.

The story is set in the fictional town of Seabrook, North Carolina in the 1940s, where Noah Calhoun (Ryan Gosling) quickly falls for the fiery Allie Nelson (Rachel McAdams) and knows instantly that he’s found "the one." Unfortunately, convincing her of that takes a lot of work. Like any good love story, obstacles take shape in the form of Allie’s meddling mother (Joan Allen), and a soldier who later captures Allie’s heart (James Marsden). Eventually, Noah and Allie go their separate ways but come together in an explosive reunion. Noah is the ideal man of every woman’s dreams — he’s charming, insatiable and clear on what he wants, even though Allie constantly equivocates on what she wants versus what is expected of her.

This is Gosling’s first romantic lead (previous roles include Murder by Numbers and The Believer). He allows Noah to be vulnerable without appearing weak. Hollywood It-girl McAdams sheds her Mean Girl façade and opts for the sweet but torn Allie. Sam Shepard makes his minor role as Gosling’s father into a humorous and memorable character.

The movie stems from the 1996 novel by Nicholas Sparks, which remained on the New York Times’ best-seller list for a year, yet took seven years to make it to the screen. Rowlands’ son, Nick Cassavetes, directs the film with tenderness and beauty, while managing to avoid the sugary sweet traps to which love stories usually fall prey. Overall, The Notebook is a character-driven movie with spirit that reminds all of us that the power of love can beat anything.