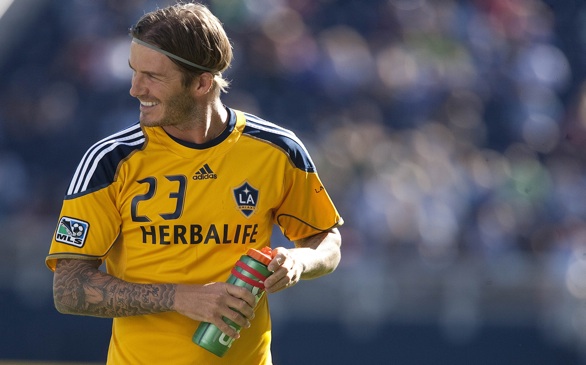 David Beckham's long goodbye might turn into a "nice to see you again."

Supposedly Paris-bound for months, the global icon won't be going to the French soccer club Paris Saint-Germain, and in fact, evidence strongly suggests that the 36-year-old will stay put with the Los Angeles Galaxy. This, however, does not mean there is a deal completed to keep Beckham with the Major League Soccer champions. Several hurdles remain but none appear insurmountable.

"We're down the road," Tim Leiweke, president of AEG, which owns the Galaxy, said in a telephone interview with the Los Angeles Times on Tuesday. "I am confident we'll get it done. We have work to do, but we're not there yet. And as much as I didn't get too low when they (PSG) were planning the parade down the Champs-Elysees ... now as much as the media is reporting that we're done, I've been on the phone with (Beckham's) people all day. "Trust me, we're not done. I wish we were done."

There are many other issues complicating the situation. PSG was not the only club interested in acquiring Beckham, Leiweke said.

The latest swirl of Beckham-related buzz was sparked when Leonardo, the sporting director of Paris Saint-Germain, said in multiple interviews that Beckham would not be coming to France, calling it "a shame." He added that family reasons were behind Beckham's decision to stay in Los Angeles after spending five seasons here, understanding the desire not to uproot wife Victoria and their four children. Still, that didn't mean other suitors had given up the pursuit of Beckham, Leiweke said.

"It's not just Paris. He's had other offers," Leiweke said. "And every one is greater and more expansive, bigger than anything we're talking about. In addition to that, we have the added complication that David has the right to purchase a franchise in this league. "There are a lot of issues we are going through. We are committed to David and he has always felt strongly about the Galaxy in L.A. and it does not surprise me that his family would prefer to stay in L.A. "I believe we're heading in the right direction. I'll repeat what I said in November: I believe David Beckham will play for the L.A. Galaxy this year."

Beckham's five-year, $32.5 million contract with the Galaxy ran out Dec. 31. But he had his best season with the team in 2011: Beckham was second in the league in assists, won the league's comeback-player-of-the-year award, and led the Galaxy to an MLS title. Beckham's desire to play for Great Britain in the upcoming Summer Olympics in London was never considered a roadblock to staying with the Galaxy.

"(Galaxy coach) Bruce (Arena) has given him the ability to go," Leiweke said. "We are being supporters and fans of the Olympic Games in London. We helped put up seed money for their bid and (AEG's) O2 (Arena) in London is hosting gymnastics and basketball. We could not be bigger supporters of the Olympics."