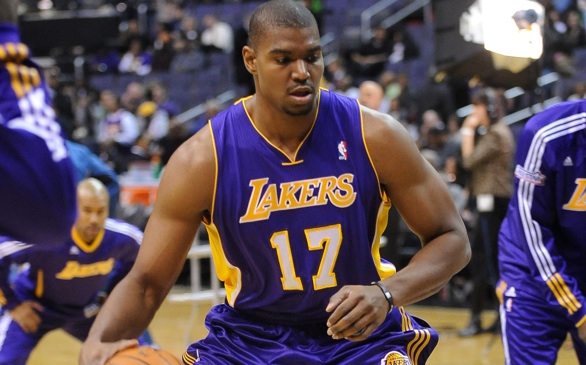 Notes, quotes, observations and opinions on the Lakers, wondering if Andrew Bynum's dominating play so far makes it more likely or less likely he'll be traded for Orlando's Dwight Howard:

That's not as absurd as it sounds. If Bynum continues to play at this level (averaging 22.7 points and 17.0 rebounds through three games), the Lakers don't need Howard, right?

In one respect, that's true, but the question has always been, can Bynum stay healthy? During his first six seasons, Bynum missed a total of 160 games. For comparison sake, Howard (averaging 17.7 points and 15.3 rebounds through six games) has missed a total of seven games in his seven-plus NBA seasons.

All of which is why the Lakers have entertained the idea of acquiring Howard, 26, a perennial All-Star and three-time Defensive Player of the Year who's in the final year of his contract and likely will be traded during the season.

Word is that the Magic wants Bynum and Pau Gasol in any package deal, which the Lakers would never do. But if Bynum, 24, keeps dominating, would Orlando settle for swapping centers? Food for thought.

"It took long enough," he said afterward, smiling, also pointing out it was possible because he had "a lot of touches" and played a team-high 38 minutes.

Asked about his oft-injured knees, Bynum said, "The knees feel fine; that's a plus. I haven't had any injuries yet. I hope I don't get any."

Why would he say something like that unless it was always in the back of his mind?

In case you're wondering, Howard has had 33 career games with at least 20 points and 20 rebounds, including a 20-point, 24-rebound performance against Charlotte last week.

He has a chance to move to the top of the NBA's all-time 20-20 list this season, because only three players are ahead of him: Shaquille O'Neal (34), Hakeem Olajuwon (35) and Charles Barkley (37).

Howard also had his 49th and 50th career 20-rebound games this season.
"The Daily Double" also had a NBA-best 66 double-doubles (double figures in scoring and rebounding) last season. Bynum had 21 double-doubles.

It's remarkable Kobe Bryant can produce a 37-point, 8-rebound, 6-assist game playing with a broken bone in his right wrist. Must be good pain-killer.

He was 14 for 29 from the field against Houston, compared to 6 for 28 against Denver in his previous game. Funny, no one though he shot too much Tuesday night.

Afterward, Bryant said he's making adjustments to try to minimize the pain, experimenting with shorter follow-throughs on his shot. The longer the follow-through, "the more pain and restriction" he experiences.

Essentially, he's searching for the perfect release point, not unlike a major league pitcher.

Brown definitely looks at the game differently that most. In his postgame comments Tuesday night, it took him two minutes to mention Kobe's 37-point performance and 2:35 before he mentioned Bynum for the first time.

The coach spent more time raving about the contributions of the "second unit" and the need to play defense for 48 minutes.

Maybe Brown knows that the Lakers (4-3) haven't accomplished anything until they win a road game.

They're 0-2 away from Staples and have a challenging assignment tonight at Portland (4-1), where they always seem to struggle (2-10 since 2005). And the Trail Blazers just won at Oklahoma City.

Brown gave the team the day off Wednesday, a wise move considering the Lakers just played seven games in 10 days and will play three games in the next four nights.

In his past two games, backup Lakers point guard Steve Blake is shooting 59 percent (10 for 17) from the field, including 4 of 8 from 3-point range, which probably explains his playing 12 minutes in the fourth quarter Tuesday while Derek Fisher sat the entire period.

After starting the Lakers' first four games, small forward Devin Ebanks did not get off the bench in the past two.

A-Rod chatted with Kobe outside the Lakers locker room after the game. Just wondering: When Bynum is whistled for a 3-second violation, as he was Tuesday night, is that another form of parking illegally?

Final word from Kobe on Bynum: "If he stays healthy, he's a monster."