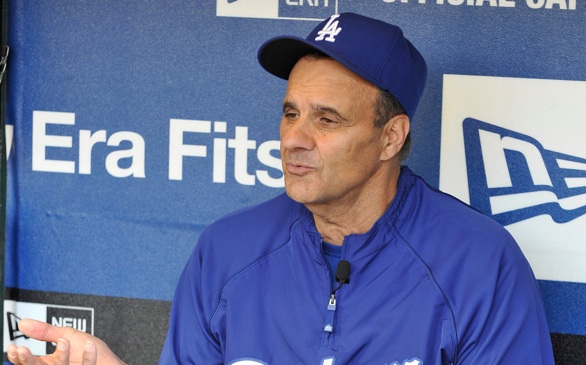 Joe Torre is planning to bid on the Dodgers for ownership rights.
(Credit: Kathy Kmonicek/Newsday/MCT)

Joe Torre stepped down Wednesday from his post as Major League Baseball's executive vice president for baseball operations, both sides announced, so that Torre could dedicate himself full-time to pursuing ownership of the Dodgers.

Torre, 71, the Yankees' manager from 1996-2007, officially has joined the group of real estate developer Rick Caruso. If the Caruso group succeeds in purchasing the Dodgers from beleaguered owner Frank McCourt, then Torre, who managed the team from 2008-10, would likely oversee the club's baseball operations.

"In Rick I found a partner who understands consumers and fully appreciates that the Dodgers are a treasured L.A. institution," Torre said in a statement. "Since moving to Los Angeles, I have seen firsthand Rick's dedication to business and the people of Los Angeles."

The idea of an ownership stake in the Dodgers has intrigued Torre since his days managing them, when McCourt's divorce cast doubt about his future viability as an owner. Initial bids for the Dodgers are due Jan. 23, and as per the terms of an agreement that McCourt cut with MLB, McCourt must choose a winner of the sweepstakes by April 30. All franchise sales must be approved by 75 percent of the other 29 owners.

The Dodgers, despite the damage they have suffered under McCourt's watch, are expected to set a record for a baseball sale; the Cubs, sold to the Ricketts family in 2009 for $845 million, hold the mark. Although Torre's presence would appeal greatly to central baseball, there looks to be a fierce competition for ownership control.

Said Caruso, in a statement: "Joe has a proven track record of fielding winning teams and I am looking forward to our group benefiting from his unique experience. I am a lifelong Angeleno; I love this city and have dedicated my career to creating world-class destinations that support this community and foster great customer experiences. Joe and I believe in the Dodgers and Dodger fans and know that together we will foster a winning culture."

The MLB post essentially served as a layover for Torre, who accepted the job in late February 2011. In overseeing baseball's umpires and discipline for on-field matters, he gave the job more star power than to which it was accustomed. He also further solidified his once-broken relationship with the Yankees, attending his first Old-Timers' Day since his departure as manager.

His post will be filled on an interim basis by his three lieutenants: Joe Garagiola Jr., Kim Ng and Peter Woodfork.

"Joe has been an invaluable resource for me and all of us at Major League Baseball this year and has splendidly communicated with our on-field personnel, general managers and the umpires," Selig said in a statement. "I understand his desire to pursue an opportunity in Los Angeles. Joe has been a lifelong friend and I know that will continue in the future."

Torre's new pursuit will allow him to spend the bulk of his time in Los Angeles, where he moved his family after taking the Dodgers' managing job. In his MLB post, Torre traveled significantly and spent a great amount of time at baseball's New York office.