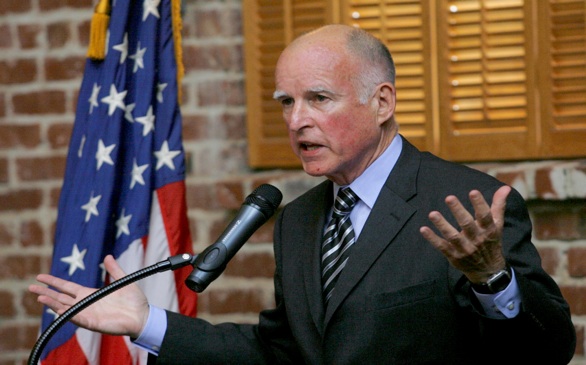 California Gov. Jerry Brown unveiled his new budget plan, calling for a painful $4.8 billion cut in public school funds if voters reject a proposed tax hike that he hopes to put on the ballot in November.

Despite the possible reduction _ the equivalent of slashing three weeks from the school year _ the spending blueprint Brown released Thursday is a relatively optimistic document. It assumes he will have to close a $9.2 billion deficit, a vast improvement over last year's $26 billion gap.

Half of the deficit would be wiped out through the temporary half-cent sales-tax hike and increased levies on the wealthy that Brown wants voters to approve _ or by the schools cuts. The remainder would be eliminated with reductions in welfare, Medi-Cal and other programs.

Brown was scheduled to roll out his budget next week, but his administration erroneously posted the document online. At a hastily called news conference, the governor claimed credit for the state's shrinking deficit but noted that more painful work remains.

"California is recovering," Brown said. "We now have the possibility of eliminating, over the next several years, the deficits that have plagued California."

To do that, Brown must persuade voters to approve a statewide tax hike for the first time since 2004; he promised them final say in the matter when he ran for office. He will also have to persuade his fellow Democrats, who dominate the Legislature, to continue paring back treasured social-service programs.

Those include what administration officials said was a $1.4 billion decrease in welfare and child-care services for poor families. Nearly $1 billion would also come out of Medi-Cal, the state's health care program for the poor. The administration also proposes saving $64 million by moving children out of the popular Healthy Families program that provides health care to offspring of the working poor.

Democrats have already said they do not want to make reductions before May, in case the economy recovers enough to boost tax revenue and shrink the deficit further. Brown's proposal presumes that most of the cuts would be made by March 1.

"We are not interested in making early cuts here, and we don't think it is necessary," said Senate President Pro Tem Darrell Steinberg, D-Sacramento. "We have done significant damage to the services for those in most need in California in the past several years, and we are not going to do any more unless it's absolutely necessary."

Brown countered that if the Legislature delays action, the cuts will need to be deeper.

"This is not nice stuff," Brown said. "But that's what it takes to balance the budget _ and that's assuming we get the revenues."

If the revenue fails to materialize, the governor proposes cutting the schools money and $200 million each from California's two public university systems. He would also take funds from courts and firefighting services and eliminate lifeguards at state beaches.

Republicans said Brown intentionally targeted popular programs to scare voters into approving higher taxes.
"This cynical, scare-tactic budget strategy once again hinges on the hope that voters will ignore their own financial problems to bail out the Democrats with another ill-advised tax increase," said Tom Del Beccaro, chairman of the California Republican Party.

Even before Brown formally unveiled his budget, Republicans who had seen it began to criticize it.
"Can't tax our way into economic prosperity," said a Twitter post by Sabrina Lockhart, a spokeswoman for Assembly Republicans.

GOP lawmakers are likely to have little influence over the budget, however. Democrats have comfortable majorities in both houses of the Legislature and can pass budgets on their own. Republican backing is needed only to increase taxes and fees, but the governor is trying to bypass the GOP by taking his tax plan to the ballot box through the initiative process.

Still, advocates for social-service recipients were lining up to decry the new spending plan.
"These are ugly cuts," said Anthony Wright, executive director of Health Access California, which tries to expand health coverage for the poor.

"Even if revenues are approved, there will be severe cuts to the health care system we all rely on."
Some items in the governor's proposal could cause consternation among teachers unions and other Democratic allies. The governor proposed eliminating restrictions on class sizes and other education-spending mandates. Instead, he wants to give school districts more flexibility to spend their money as they see fit.

"If they think they can save some money by adding a few kids to class, then they should be able to do that," Brown said.

Before the Internet snafu forced the governor to release his budget, Brown was focused on trying to improve the prospects for his November tax plan. He had spent the morning meeting with local government officials, arguing that they should table their own funding initiative in favor of his.

Brown subsequently told reporters that he would not discuss his budget proposal, preferring to unveil it Tuesday. Less than two hours later, the administration was frantically scheduling news conferences after a copy began circulating around the Capitol.