Changing Clippers culture, from inside out 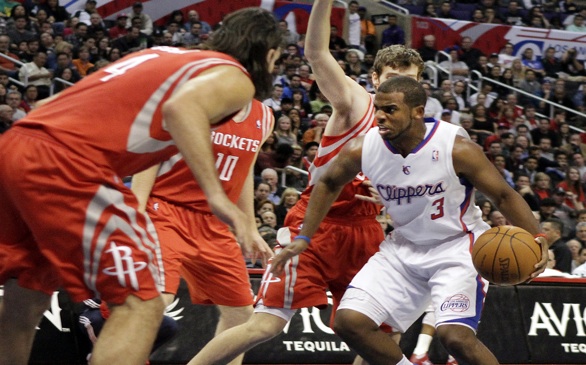 Five games into the season the Los Angeles Clippers are 3-2, and though that's hardly reason to start clearing space to hang championship banners at Staples Center, it's a significant step for a team that didn't earn its third win last season until its 16th game.

These Clippers are fun. They're exciting, from Chris Paul's visionary floor leadership to Blake Griffin's acrobatic dunks and DeAndre Jordan's momentum-changing blocks. Their crowds are lively and involved, loyal for so long and infinitely grateful to have a reason for optimism. "Clearly they're not jumping on a bandwagon," General Manager Neil Olshey said.

Their fans have gone the distance. But will the Clippers do the same?

This time will be different, Olshey said, and it's easy to believe him. Their mind-set has gone from fearing the worst to demanding the best from each other. Their journey might be rocky at times _ they still haven't outrebounded anyone and rank last in the NBA with an average of 35 rebounds per game _ but it won't be dull.

"The ability to do something special here is just that much more magnified because of the history," Olshey said Thursday in his office at the team's Playa Vista practice facility.

"And I think that's the kind of people we want around here. We want guys that want to be here, that want to prove something and want to build their own tradition.

"Now, we may be starting a little late, but it's better late than never."

It won't be easy to transform a culture built on a foundation of failure.

"But you've got to change it from the inside out, and the way you change it is by the guys who are wearing the uniform," Olshey said. "So when you bring in Chris Paul and Chauncey Billups and Mo Williams and Caron Butler, when you're lucky enough to draft Blake and DeAndre, that changes your culture."

Griffin and Jordan are benefiting from the calming presence of Paul and the veteran savvy of Billups, who have preached the need for steady progress in this condensed, chaotic season.

"These are not guys that fall apart. Chris Paul, Chauncey Billups, Caron Butler _ they don't fall apart," Olshey said. "And what they've done is they've also elevated the expectation level from a win standpoint of guys like Blake and DeAndre. ...

"I just think that the mental resolve of the team based on having guys like Chauncey, Mo _ who's played in the conference finals _ Chris Paul, Caron Butler, who was part of a championship team even though it was in a limited role, these guys don't break down. They help other teams break."

That said, the Clippers still must improve their rebounding and clamp down defensively. They've allowed opponents to shoot a too-high .467 from the floor and they've allowed 98.4 points per game, among the most generous in the NBA.

They need size up front, and Olshey acknowledged he's looking for help but isn't shopping any of his players. He has three key assets: a mini mid-level exception of $2.5 million, a $2.8 million trade exception he got for Al-Farouq Aminu in the Paul trade, and a $3.8 million trade exception he got for Eric Gordon in that deal. But it's too early for teams to consider trading expiring contracts or concede the season, and he's in no hurry to use those assets now "for someone that's not going to move the needle."

In the meantime, he's hoping for a rebounding boost from 6-foot-10 Solomon Jones, who signed as a free agent this week, and Reggie Evans, who has been idled by a sprained right foot but is likely to return next week. Evans, though undersized at 6-8, is a rugged and persistent defender who has a physical presence.

"The idea of a 6-11 guy that can rebound, defend and block shots walking around right now without a job _ there's probably a reason he doesn't have a job at this point," Olshey said. "So if you're going to acquire somebody by trade, right now we'd rather bring somebody in without having to give something else up at a position that we like right now. We've been trying to do this for the last year or so now. We want to add, not subtract."

"The great part about Chris, Chauncey, Caron and Mo Williams, that's all they know. They win," Olshey said. "They don't come in with 'Let's hope we can win' or 'Let's try to win.' They win.

"These guys have won everywhere they've been. They've won at a high level and so what it does, it sets the bar at 'This is what we do and this is what we expect you guys to do, and we'll give you the road map.' "

As long as they don't go astray, it should be an enjoyable ride.