Out of the Graveyard and into the Fire: One on One with Nicholas Brendon 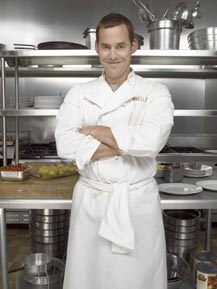 Untitled Document TV pilot season can be a scary place, especially if you are coming from one of the most successful shows of the past decade. Once an actor leaves a show as popular as "Friends" or "Seinfeld," it’s sometimes hard for audiences to see them as anyone other than Ross or Kramer. But for Nicholas Brendon, who starred as Xander Harris on the cult favorite "Buffy the Vampire Slayer" for seven seasons, he’s not worried. In fact, he’s eager to attack a different type of monster with his new Fox series "Kitchen Confidential."

"I love sci-fi, but it’s going to be nice not coming to work and having to have sex with a giant praying mantis or worry about some eight-hour fight sequence," Brendon jokes.

In "Kitchen Confidential," Brendon stars as Seth, a young chef recruited to work at a top New York restaurant by an old colleague. The series, which is executive produced by Darren Star ("Sex and the City") and Dave Hemingson ("Just Shoot Me," "American Dad"), is based on renowned chef Anthony Bourdain’s best-selling autobiography. And while the role may seem like a drastic stretch for someone who is used to dating demons and hanging out with vampires on set, surprisingly, Brendon finds himself at home in the kitchen.pr> "I really do like to cook," Brendon admits. "I watch a lot of cooking shows and I’m even taking classes because I want this to seem like second nature for me on screen."

Although the 34-year-old jokes that his favorite dish to make is chili because, "you just put the ingredients in a pot and let it sit there for two or three hours," Brendon takes his new onscreen role seriously. And despite lightening his hair for the part, fans will see a much darker side to the actor typically known for playing up the comic relief.

"There’s a lot of debauchery in the restaurant world," Brendon states. "My character deals with everything from substance abuse to gambling problems. But the series is funny. It’s hard to explain, it’s just so daring. There’s really nothing like it on TV. It has everything – wackiness, high jinks, camaraderie."

And with a cast that includes former "Friends" hottie Bonnie Somerville and Pearl Harbor bombshell Jaime King, viewers can bet that things are definitely going to get hot in this "Kitchen."

"I’m not speaking for myself here – I’m just the funny guy in the middle – but we’re not a bad-looking cast," Brendon says. "I definitely think the sex appeal factor plays a bit into the show."

When asked about "Buffy’s" loyal fan base and whether or not he’s worried he will forever be branded as Xander Harris in the public’s eye, Brendon replies: "As we came to the end of the series fans kept asking, ‘Why isn’t there more Xander?’ After four or five years on a series like ‘Buffy,’ unless you were Sarah [Michelle Gellar], the series’ regulars kind of became less important than the guest stars coming in. There was always some kid with cancer coming in or the Key or some decrepit monster … with ‘Kitchen Confidential’ though, there’s no show without the chefs."

As Brendon prepares to start shooting the second of 12 episodes already picked up by Fox, the actor turns to a lesson he learned on "Buffy" as he waits to hear the verdict on whether or not audiences are responding to "Kitchen Confidential."

"When ‘Buffy’ ended I wasn’t emotionally prepared," he recalls. "You get attached to these things. But I survived. I learned that life changes and you should never get too high or too low."

No matter what, though, Nicholas Brendon always has one safety net to fall back on – the one and only Xander Harris.

"The Cartoon Network is working on a ‘Buffy’ animated series," Brendon states. "So far everyone outside of Sarah is involved, we’re just waiting for Joss [Whedon] to finish up Wonder Woman. As long as they want me though, I’ll be there."

Interviews
'Crazy Rich Asians' made Henry Golding a star. Now he's showing Hollywood everything he can do
527 views

Interviews
Mary McNamara: After losing a child, 'Pieces of a Woman' filmmakers channeled their grief into art
562 views