Apple Getting Ready to Launch a TV Killer?: Apple’s TV presence is strong at CES, though it’s not there 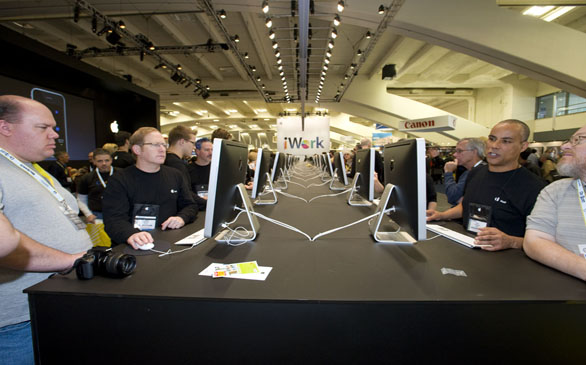 On Wall Street, Apple Inc. pulled off its own TV trick as its stock hit a record high. Though the Cupertino, Calif., iPhone maker didn’t attend the CES, Apple cast a huge shadow over the world’s largest personal electronics show Monday as rumors continued to spread that it had its own TV in the works. Apple shares hit a record $427.75 before settling back to close at $421.73.

The possibility of an iTV that could upend the industry much the way Apple upset the music and computer business is causing major TV companies such as Samsung Electronics Co., LG Electronics and Sony Corp. to scramble to come up with the next big thing in home entertainment.

“The TV hasn’t gone quite through the big revolutionary change that we’ve seen on those other screens” such as cellphones and computers, said Shaw Wu, an analyst at Sterne Agee. “These other players are trying to jockey for position ahead of Apple.”

But not many industry observers have been impressed with the preemptive efforts to undermine Apple’s possible move into the TV-making business.

“They’re just throwing spaghetti up against the wall right now,” said Peter Misek, an analyst at Jefferies & Co. “I think Apple’s going to force a big change in the industry - and it’s hard for the companies to respond when they don’t know what iTV looks like yet.”

Apple has declined to comment, citing company policy against responding to rumors. Speculation about Apple’s TV plans took off in October when a biography of Steve Jobs suggested that Apple’s late co-founder believed he had “cracked” the code to creating a next-generation TV set that is “completely easy to use.”

Analysts have guessed that the Apple TV would feature voice-control technology reminiscent of the iPhone 4S’ Siri feature, which can understand a large number of spoken commands and can help consumers look up information online, send emails and find recommended restaurants close by.

Others have also suggested that Apple, which does not attend the CES, would build a TV that recognized users’ physical gestures, enabling them to select shows and browse the Web simply by making movements with their hands.

But few of the major TV manufacturers were able to demonstrate voice commands or gesture recognition systems on their 2012 sets, leaving critics with the feeling that the industry was spinning its wheels, waiting for Apple to make the next move.

At the CES on Monday, LG showed off its “Magic Remote,” a device with few buttons that resembles a Nintendo Wii controller - enabling the viewer to point at and select different images and buttons on the screen.

Sharp’s Aquos Freestyle flat-screen TVs get their signal wirelessly and are light enough to be carried around the home, as the models who paraded down a showroom runway demonstrated.

Samsung showed off a new line of smart televisions with a suite of games and Web applications built in. The company, a major rival of Apple’s in both smartphones and tablets, hinted at a gesture-and-voice-control system for its upcoming TVs but did not show off those features.

Irvine-based Vizio Inc. unveiled three new high-definition sets that feature Google TV, the search giant’s TV navigation software that will also run on TVs from Samsung and LG. The sets comes with dozens of built-in apps that users can use on screen to fetch sports scores, watch movies and play games.

“The manufacturers have no choice but to turn to Google because there’s no one else,” Misek said. But until Google can make its phones, tablets and personal computers all talk to each other, the way Apple’s do, Google and its TV partners “won’t be able to catch up.”