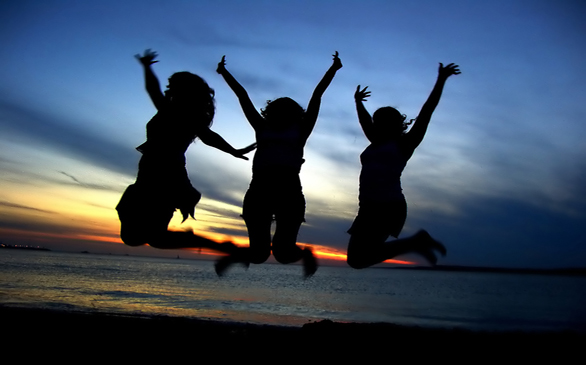 During an appearance in late December on CNN’s “Piers Morgan Tonight,” Jane Fonda was asked which man from her past she would choose to accompany her to a desert island. Would she select a famous ex-spouse like Ted Turner or Tom Hayden? Or would this be the moment when Fonda spilled the beans about some long-ago liaison with a heretofore unknown beau for whom she still pines?

To Morgan’s obvious disappointment, Fonda chose: None of the Above.

“My girlfriends,” she replied.

The 29-year-old writer discovered just how important female friendships are to her life when she moved to Chicago in 2007. She and her husband, Matt, knew a few people when they relocated for his job with a law firm - she’d been an editor with Oprah Winfrey’s magazine in New York; he’d finished law school in Philadelphia - but not enough to fill the dance card of an acceptable social life.

So Bertsche took to the streets. She hunted down girlfriends using newfangled social media as well as that 21st century version of a quilting bee: yoga class. Each week for a year, she made a date with a potential best pal, keeping her fingers crossed that she’d made a connection.

And she records her experiences in a funny, spirited new book, “MWF Seeking BFF: My Yearlong Search for a New Best Friend” (Ballantine).

“Friendship is such an important aspect of our lives,” Bertsche said in a recent interview. “But we tend to think of friendship as a luxury - something we fit into our lives if we have time after career and family.”

Rarely is it discussed with much seriousness or intellectual rigor, Bertsche noted. For one thing, the need for friends often goes unacknowledged because nobody wants to come across as a shunned loser. Moreover, the world, like CNN’s Morgan, is preoccupied with romantic love; the fact that Bertsche had that part covered - the husband with whom she shares her Lincoln Park home is “my most intimate companion and the love of my life,” she writes - means that people expected her to be satisfied. Friends - so the world believes - are the parsley, not the entree.

And yet Bertsche’s intriguing book reminds us of an unpleasant reality: Female friendships don’t count. They’re cute and funny and wacky and winsome - but in the arts, they’re not often portrayed with the gravitas routinely afforded male friendships. Men are shown bonding while getting shot at in war; women, while getting their nails done.

Men get “A Separate Peace.” Women get “The Baby-sitters Club.”

The former is a 1959 novel by John Knowles, a grim morality play that unfolds against the backdrop of World War II and the deaths of millions of people. The latter is a series of young adult novels published between 1986 and 2000 whose keynote tragedy is the death of a beloved collie.

Men get Stand by Me the 1986 film in which young men confront the realities of death and the inviolable hierarchy of social class. Women get Beaches the 1988 film in which young women confront the agonies of having one’s boyfriend stolen. Men get “Of Mice and Men,” John Steinbeck’s powerful 1937 novel about a pair of men who share a tragic dream of freedom. Women get “The Sisterhood of the Traveling Pants,” the 2001 novel by Ann Brashares and 2005 film about women who share a pair of trousers. Men get Cain and Abel. Women get Kim and Kourtney Kardashian.

There are, of course, many complex and inspiring portraits of women’s friendships. “Talk Before Sleep” (1994), a novel by Elizabeth Berg; Fried Green Tomatoes(1991), a film based on the 1987 novel “Fried Green Tomatoes at the Whistle Stop Cafe” by Fannie Flagg; and “Testament of Friendship: The Story of Winifred Holtby” (1940), a memoir by Vera Brittain about a talented confidant who died tragically young, are estimable works that elevate female relationships.

And the 1991 film Thelma & Louise remains the quintessential pop-culture view of female friendship, even though - spoiler alert! - the ending makes one wish they’d confined their association to a yoga class every now and again.

To be sure, women’s friendships often are depicted in entertaining comedies _ and there’s nothing wrong with that. Life can’t be a steady diet of “Antigone” and “Joan of Arc.” Watching the TV series Sex and the City or the 1997 film Romy and Michele’s High School Reunion can do for a bad mood what chicken soup can do for a bad cold. In neither case are the results scientifically verified, but we all know what works. Thus it isn’t the case that women’s friendships are always trivialized or that men’s are always treated with dignity and respect. If that were so, no beer commercials would ever have befouled the airwaves. But when it comes to the average cultural take on the respective relationships - men with male friends, women with female - women usually look silly, and men serious. Men get Dead Poets Society the 1989 film about liberating the soul through classic literature; women get “Divine Secrets of the Ya-Ya Sisterhood,” the 2002 film and 1996 novel by Rebecca Wells whose title alone undermines any pretense of profundity.

Bertsche knew that exploring female friendship in a book was fraught with peril. “When people asked me what I was writing about, I didn’t want to say,” she admitted, fearful lest they envision “hearts and BFF necklaces. There’s a lot more to it than that.”

As she discusses in her book, friends are vitally important to both sexes - but not for the same reasons. That’s just one of the insights you can glean from Bertsche’s account of her 12-month quest to find a best buddy.

“Most of us are embarrassed to say, ‘I need friends!’ We think, ‘Do I really want to say that to the world?’”

Bertsche took the risk. And the result is a breezy, unexpectedly thought-provoking book that does to conventional wisdom about female friendships what Thelma and Louise - oblique spoiler alert! - did to that nasty trucker.

Lifestyle
If you fantasize about becoming a morning person, here are 5 great ways to wake up your routine
455 views

Lifestyle
‘I haven’t had a job since March 13’: How costume designers are coping with COVID-19
787 views

Lifestyle
Online education was a mess in the spring. As COVID-19 prompts schools to stay virtual, will it get
517 views