Trojans, Bruins Face Off on the Ice 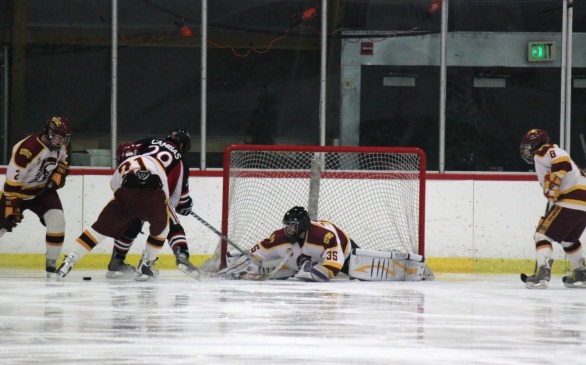 Yes, the University of Southern California Trojans and UCLA Bruins will face off against each other in back-to-back hockey games.

In the United States, college hockey is not that popular. But I am not here to offend any of those collegiate teams, more or less the sacred squads at USC and UCLA. Essentially, they play for one reason (as all athletes do): for the love of the game while competing.

In the coming days, both the Trojans and Bruins will face off on the ice in two consecutive games, one on each team’s home ice. Who will win? What will happen? These are two questions that I ask myself, but it could go either way. However, UCLA has had the edge thus far.

During September of 2011, USC and UCLA competed in a preseason match, with the Bruins coming out victorious by a score of 5-4. Now that is a shootout. Then, UCLA topped USC once again in October via shootout, 4-3 in the first game of the Crosstown Cup. And the Bruins finished off the Trojans in November in the second affair, 5-4, which was played at Staples Center in Downtown Los Angeles.

The Bruins are a power to reckon with in the Pac-8, but the Trojans can certainly compete at a high level. Could we see each team winning one of the games? Perhaps, but that will depend a lot on how the respective defenses, particularly the goalies, block their nets.

Junior Michael Carder leads the Bruins in scoring with double digits in goals and assists. For USC, Adam Zacuto is the leader offensively, edging his teammates with goals and assists in a remarkable manner.

USC hosts UCLA on Friday, January 20, at The Rinks – Anaheim ICE in Anaheim at 8:30 p.m. On the next night (Saturday, Jan. 21), the Bruins are scheduled to entertain the Trojans at The Valley Ice Center in Panorama City at 8:30 p.m.