For Clippers' Paul, it's shoe time 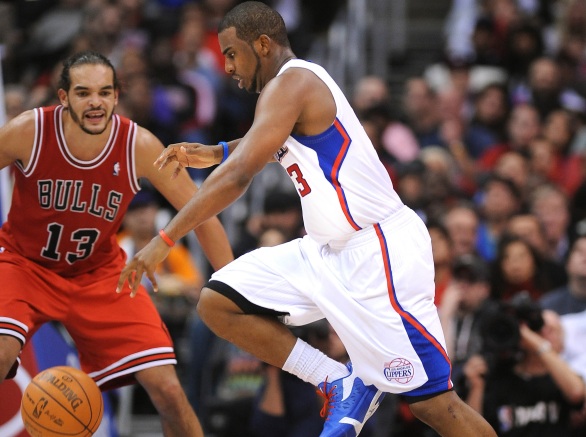 Chris Paul of the Clippers has a shoe upgrade, the CP3.V.
(Credit: Wally Skalij/Los Angeles Times/MCT)

Chris Paul walks into the party like he is walking onto a yacht. Even at a press event, he arrives with his own microclimate of cool - sans the usual hubris. Needless to say, I see a lot of myself in him.

Here are some other things the Clippers' new star and I have in common:
We're both short
Both live in L.A.
Both have a new line of NBA shoe.

My new shoe comes with a protractor, hand sanitizer and a little secret chamber to stash band-aids. I make them in my garage using a glue gun and glitter.

So far, I have sold one pair, to a dude I met walking barefoot down Colorado Boulevard after the Rose Bowl. I think he was just cold and desperate. Now he is merely cool.

Paul's new shoe comes with two types of tread - one soft, one firm- and is engineered to accommodate that crazy Tchaikovsky toe roll he does, the one that makes defenders freeze, then panic, then curse.

Paul has the reflexes of a Paris pickpocket, and to quote the classic song, "more moves than Ex-Lax." He seems to be, in the few weeks we've gotten to study him, the real deal.

So, with Paul, we appear to have hit the jackpot, though we won't have the definitive answer for a year or so. Fair or not, a city's image is based on the demeanor of the athletes who represent it. The cool yet affable Paul could certainly be a welcome addition to a town that is currently defined by Kobe (too arrogant), Beckham (too Euro) and World Peace (too cosmic).

Welcome to our jungle, Mr. Paul. Next year, maybe you could host the Oscars?

This particular day, he's touting his newest shoe, the CP3.V, which sounds like one of those computer upgrades we all dread. No upgrade was ever better than the version that preceded it, that's a proven, but if America can sell
you something there's pretty much no stopping "progress."

Took 15 months to develop this shoe, which is interesting only for what it tells us about Paul as a player and the wacky/sophisticated world of athletic shoes. It was only weeks ago that police pepper-sprayed frantic customers during release of the retro Air Jordans. As Sports Illustrated would put it, another sign of the apocalypse.

Anyway, Paul's new shoe is more than footwear. It comes with a story line and endearing tributes to his family.

For instance, there are 61 little triangles, which if you've followed Paul at all, you know is a venerable number. His beloved grandfather was slain at age 61, and as a high-schooler, Paul followed up that tragic day with a 61-point performance in his next game, intentionally sandbagging one free throw at the end just to preserve the numerical tribute.

Meanwhile, on the back of the new shoe, like Braille, there are nine dots, 10 dots, and 11 dots - 9/10/11 - the day he and his former college sweetheart were married. There is also a dot pattern in honor of his young son.

"Even when I was in middle school or high school, I could play in any shoe," Paul says. "I didn't care how much they cost. ... In college, I used to play in boats ... like bricks on my feet."

Ah, the good old days of five, six years ago.

Today, when Paul is working on a new version, the 26-year-old spends half a day in the shoe company's research lab, where they measure his zigzag game with such things as "pressure maps," a special liner in a test shoe that sends microbursts of stress-point data to a computer.

They also compress video to analyze a player's cuts and leaps.

Accordingly, the shoe is designed with the player's specific game in mind. In Paul's case, the tread is made softer on the inside to allow for the relentless pressure on that part of the foot, and firmer on the outside, for greater stopping power. The heel, likewise, has a crash pad in the center to cushion landings.

"Chris has an interesting style of play," says designer Tom Luedecke, who developed the shoe with Paul's input. "He uses his feet a lot more than other guys.  With Chris, it's all about sprinting and cutting," Luedecke says.

"I'm always trying to get quicker and lower to the floor," says Paul, who uses a new pair for every game.

"I almost feel like I'm cheating with this shoe," he says. And if the marketing department didn't feed him that line, you know they're carving it into their wrists to use later.

Only about a dozen NBA players have lines of shoes specifically engineered for them, though tie-ins and sponsorships are widespread among other players.

And the league has to approve every shoe, Paul says, which means the flashiest version of the CP3.V, the Jekyll and Hyde, may not be seen this season.

You should see the Jekyll and Hyde, in colors that could burn away your retinas. Each shoe is a color inversion of the other: One shoe is snow-cone red with a gray interior; the other is gray on the outside and red on the inside.

"That's because I'm two different people, on the court and off," Paul explains.