Hopefully for Mora, it won't be more of the same 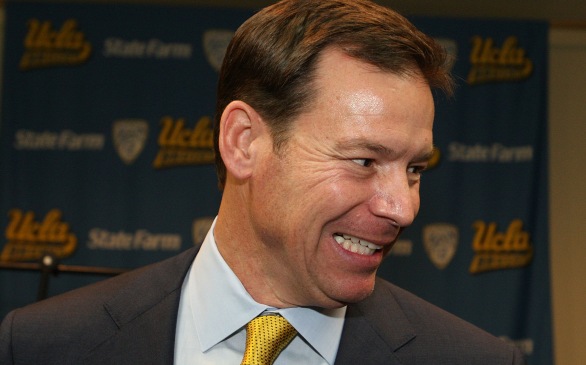 So begins another do-over for a program that hasn't gotten it right in awhile. By "it," we mean pretty much everything. By "awhile," we mean since Bob Toledo was known as being a genius. Yeah, that long ago.

The Bruins lost to Illinois on December 31, 2011 in the Kraft Fight Hunger Bowl, 20-14 with the Illini winning for the first time since Oct. 8.

The result from a point-spread standpoint had been predicted, UCLA considered so fit for postseason participation that it was made an underdog to a team on a six-game losing streak.

We're not sure if new coach Jim Mora totally understands how much work he has in front of him, but here's hoping he brought a shovel to Westwood. This isn't just a rebuilding. It's one step from being an exhumation.

So it was logical, at least in UCLA's culture, for Rick Neuheisel to launch into his "closed the gap" sales job concerning USC, only days before the Trojans closed the book on him.

Now, even the way the Bruins dress is being mocked. And the ridicule is coming from The Wall Street Journal, a profoundly professional operation that just likened UCLA's outfits to women's underwear.

The Journal honored the Bruins for having the worst uniforms in college football. The blue-and-gold color combination "doesn't look intimidating," a Hollywood costume designer told the newspaper. Remember, the Bruins then wore all-white against USC.

"The jerseys belong in one of those lingerie leagues," Anthony Coleman, the managing editor of a fashion blog, told the Journal. "Baby blue should not be a primary color in male apparel, ever."

For UCLA, turns out white isn't much of an option, either.

Yes, the Bruins program currently is a joke, and everyone is lining up to take their swings.

Before Mora even could be formally introduced as UCLA's next coach, the Los Angeles Times predicted he "more than likely" was the wrong choice. The Los Angeles Daily News, attempting to illustrate how funny the rest of the world viewed the Kraft Bowl matchup, referenced "Henny Youngman," a comedian who has been dead now for nearly 14 years.

This is desperate journalism, sports fans, but that's where the Bruins have left each one of us, reaching so far for punch lines as to endanger rupturing a tendon.

In the past, schools have refused bowl invitations for all sorts of reasons, including the determination that the football team wasn't worthy. Such a bold move isn't uncommon, particularly at proud institutions, like Notre Dame.

Ohio State, for example, declined an offer to play in the 1962 Rose Bowl. Minnesota went instead. The Golden Gophers even won the game, 21-3. Who'd they beat? Why, UCLA, of course. Did you really have to ask?

Then we have the Bruins, who played only after school officials petitioned the NCAA to be make the team eligible for the game, despite having a losing record.

We applaud these officials for fighting for their players. At the same time, formally begging for a bowl berth only plays into the well rooted notion that UCLA is an also-ran program, particularly compared to its neighbors at USC.

Incredibly, the Trojans, banned from postseason play by the NCAA, have had better bowl seasons the past two years than the unshackled Bruins have had. In being idle, USC still managed to pull away.

Now consider that UCLA's previous bowl appearance, the 2009 EagleBank, came only because Army lost its finale. The Bruins are establishing a tradition of possessing shaky credentials.

Yeah, we're not sure if Mora totally understands how much work he has in front of him, but we're guessing he's starting to figure it out.

Along with all the Bruins' issues, along with sharing the same city with USC, along with learning on the job, Mora has to prepare for play in a difficult and deep Pac-12.

This is serious stuff.

This isn't the Victoria's Secret Football League, even if The Wall Street Journal says the Bruins are dressed for it.