Searing Your Musical Soul: Interview with Phil Alvin of the Blasters 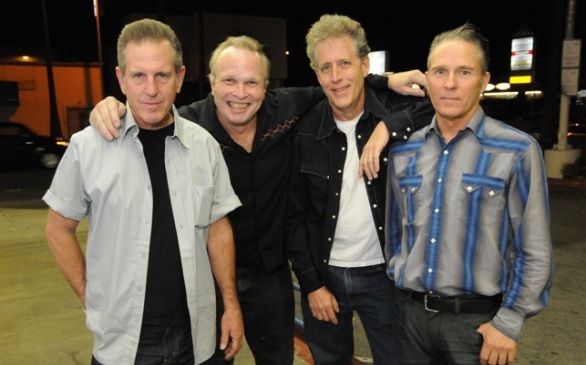 You've heard their music on T.V. and in films such as From Dusk Till Dawn.  Seeing The Blasters live, what sears your soul is their intensity.  As a four-piece band made up of Phil Alvin, John Bazz, Keith Wyatt and Bill Bateman, the members create a unique sound: they rip.

T-Bone Walker taught Alvin years ago to strip a band to its core.  Then one could add horns, keys, etc...  He took that message to heart.

Alvin has one of the most powerful, versatile voices in rock n' roll.  Not only is he hitting notes he hit 30 years ago, but higher notes than he could back then.  When asked about this:

“Well it's certainly not from good living!  I was trained to sing from first grade on.  The nuns at school taught me to breathe properly and would poke me in the ribs if my stomach stuck out when I breathed in.  I have to give them a lot of credit actually for teaching me right.  I was in choir until the eighth grade and then started my first band in ninth grade.”

One element of The Blasters live is how fresh they keep their songs.

“That's the challenge of a singer!” exclaimed Phil.  “It's my job to impart the intent of the song to you.  If I can't do that, then I'm not doing my job.  I use all sorts of internal mechanisms to accomplish this.  I may be singing about one thing, but may go somewhere in my mind to symbolize those emotions. When I saw Muddy Waters, I wanted to hear ' I'm a Man' with as much intent.”

The Blasters last album was released in 2009.  When asked about the next one, Phil explained:

“We thought we were going on the road before I got this staph infection in my knee so we had just cut a new CD to bring on tour with us.  It has eight songs, two originals.  If I have a song that I feel says what I want to say, and I don't see that it exists out there,  I get it out there.  One I wrote is about bi-polarity. I don't know that anyone has ever written a song about that before.  I almost titled it 'Bi-Polar Lover' but instead called it 'The Cool Breeze Came Creeping.’”

Phil seems like a kid onstage, enjoying every minute of it.  But the road takes its toll.

“I love to play. You can tour for a while and then stuff happens at home like your mom dies, and you're gone, and there's nothing you can do about it. I'm in shape when I'm on the road. I spend a great deal of energy on stage and the next morning I'm on the road to the next town.  Touring brings a certain diligence.”

Alvin also has a most unconventional hobby, relaxing after a gig by doing math.

“I have a masters from Long Beach State in mathematics. I've actually been to UCLA twice working on set theory and semantics.  My PhD was not accepted at the time because I was using information that was not yet found.  It was unacceptable to them in 1979 but it's accepted now.  For me, perfect harmony is when I go on road, play gigs and stay up all night doing math.”

When asked about changes in the music business over the years, Phil's response: “It's ruthless and illegal and has little to do with music at all,  but things are coming around now.  I was involved in a lot of contracts and if I had the person who wrote those contracts in my Business Math class that I taught, they would have gotten an F.”

What advice does he have for musicians starting out?  “Play well.  The operative word is PLAY music... Seeing The Blasters live could be a stepping stone for you to someplace else--if not a resting point.”

Their new CD, Fun on Saturday Night, drops in February.