Michael Jackson, The Doors and more. 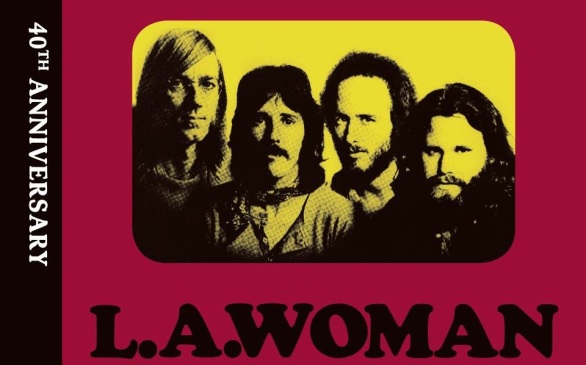 Grauman’s To Honor Michael Jackson
The estate of Michael Jackson has announced that the late singer will be immortalized in a hand and footprint ceremony at Hollywood’s legendary Grauman’s Chinese Theatre. The ceremony takes place on January 26th and coincides with the Los Angeles debut of The IMMORTAL World Tour, the critically acclaimed Cirque du Soleil production and top grossing tour in the U.S. Jackson’s kids Prince, Paris and Blanket will be in attendance and use their father’s sequined glove and shoes to make the impressions in the cement of the theatre’s forecourt. The IMMORTAL cast will perform and “Hollywood Live” anchor Billy Bush will MC the event. The fun starts at 11:00 a.m. and will also be streamed live via Twitter @michaeljackson.

The Year of the Doors
2012 is the 40th anniversary of the release of the classic L.A. Woman album by seminal Los Angeles band the Doors and the powers that be have proclaimed this year:  The Year of the Doors. First up in a year’s worth of tie-ins is the release of a 2-CD version of the album from Rhino Records and a “the making of” documentary film, Mr. Mojo Risin’: The Story of L.A. Woman, coming on DVD and Blu-ray from Eagle Rock Entertainment. Both titles drop on January 24, but there’s a chance for you to see the film a few days earlier. The Egyptian Theatre in Hollywood will be hosting a one-time screening of Mr. Mojo Risin’ at 7:30 p.m. on January 20,  and there will also be a Q&A session afterwards with Elektra Records founder Jac Holzman, who signed the band, and L.A. rock radio veteran Jim Ladd. “Surprise guests” are also promised.

Joyful Noise Flexi-disc Series
Joyful Noise Recordings has announced a series of Flexi-discs by artists like Deerhoof and of Montreal that will be available by subscription only. A Flexi-disc is a thin, flexible, single-sided vinyl record, and the ones that Joyful Noise is releasing (at the rate of one a month) will contain new and unreleased material that will not be available in any other format-- not even digital download. Lou Barlow, Akron/Family, Danielson, Dead Rider, Jad Fair, Make Believe, Tortoise, Richard Swift, Racebannon and Rafter are the other artists that will be featured. Each Flexi will cost about $4 and be limited to 500 copies. Subscription info is at joyfulnoiserecordings.com.

Cirith Ungol: Servants of Chaos
Metal Blade Records is releasing a 2-CD/1-DVD set of rare and live material from early ’80s Ventura-based metal band Cirith Ungol. The audio portion of Servants of Chaos was originally released in Europe in 2001, but the new version represents the first time any live Cirith Ungol video has been made available commercially. Robert Garven, Jr., who served as the drummer for Cirith Ungol, explains the inclusion of the footage. “This amateur video was never meant to be released. The audio was taken off the mixing console and as we were an opening act, we had little or no sound check. Regardless, this rare and primitive video is one of the few ever taken of the band.” The film was shot at the now defunct Wolf and Rissmiller’s Country Club in Reseda in 1984. Servants of Chaos drops on January 31st.

Good Lovelies: Let the Rain Fall
The three ladies who make up Canadian folk group Good Lovelies are a little bit confused about how the trio came to be. Sue Passmore says she met her band mates during a limbo competition while Caroline Brooks swears the girls met at a chess tournament. Kerri Ough has a most interesting theory, claiming that Good Lovelies came to fruition after the girls crossed paths during a bar fight. A couple of Good Lovelies facts are not up for conjecture: the band has recently released a new album called Let the Rain Fall,  and they’ll be performing live at Pepperdine University in Malibu on January 25th.

The Heaven Switch
Ryan Calhoun has had plenty of success as a solo act; he’s previously placed five songs on the iTunes Top 10 chart for singer/songwriters. Now the Los Angeles-based singer has formed a pop/rock band called the Heaven Switch; look for the group’s self-titled debut on January 24th.