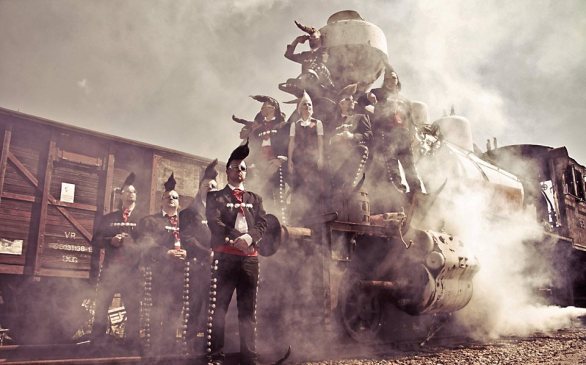 The thirteen members of this band may not actually drink as much vodka as they indicate in the lyrics of their songs but Buena Vodka Social Club is custom made for those who enjoy the kind of boisterous activity that might accompany such behavior.

The band hails from Finland, but they sound more like a Balkan brass band on rowdy tunes like “Machine Gun Blues” and “Drill-A-Hole;” if ever there was a time to strip off your inhibitions (and maybe your clothes) and do some liquored-up Old Country dancing, this is it. “Gimme Your Sushi” taps into another genre that you wouldn’t expect from these tipsy Finns---surf rock---and “I Kill the Dog” surprises with an opening of traditional acoustic Mexican music before it explodes into high energy punk at song’s end.

“Buena Vodka  Social Club” finds the Leningrad Cowboys blatantly lifting riffs from the Scorpions and various Hollywood hair bands (these guys are a hair band of their own), rolling into what is the most straight-played song on the album. Just about everything else though teeters on the edge of dementia, enough so to remind the listener not to get too serious; this is party music!