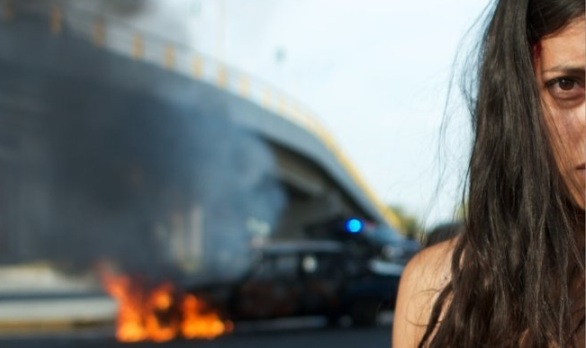 One of the most talked about films from Mexico in the last couple of years finally comes to America with a big bang. Inspired by a true story, Miss Bala provides a certain authenticity thanks to relatively new director Gerardo Nariño. Showing off his directing chops, Nariño pulls you in from the opening credits when the words, Miss Bala - in blood red letters - flash across the screen. Still, the film manages to avoid the clichés of the deadly drug wars occurring in Juarez and other places throughout Northern Mexico and the U.S. border.

Initially, you are drawn into the complex story set in the Mexican border city of Baja. Miss Bala chronicles three terrifying days in the life of unsuspecting beauty queen hopeful, Laura Guerro (Stephanie Sigman), who finds herself in the struggles between the La Estrella gang and the police. Laura soon gets caught in the fast life of trafficking money and weapons across the US-Mexico border as her dream of being 'Miss Baja California' becomes a nightmare as she becomes a pawn between the cartels and federal agents.

Laura’s foremost struggle is to protect herself and her family -- doing anything in order to make sure that happens. The film has scenes of real menace, you just don't know how she is going to escape her predicaments and showcases well-executed action scenes.

The first thing that really surprised me was the directing style, quite unusual but with purpose. There were lots of panning, traveling and sequence shots, creating a documentary style feel. Truly, this was the most notable aspect of the movie. The second was the realism of it all: the language, the characters-- especially Noe Hernandez portrayal as Lino. He really employed a different spin on the stereotypical movie gangster.

The locations and shooting scenes between cops and the henchmen feel authentic enough to send a shockwave to your heart. Nariño has what it takes to be a great director; the only drawback was that you couldn’t feel the hidden beauty and flavor that exists throughout Latin America. Miss Bala felt somewhat slow and didn’t have a large pay off at the end. I wouldn’t put it in the category of pulse-pounding classics, such as Maria Full of Grace, Sin Nombre or Traffic. Nariño fashions a highly original thriller that pulls you but has a difficult time keeping you enthused.