‘American Idol’ returns, but this time there’s a ‘Voice’ coming from the back 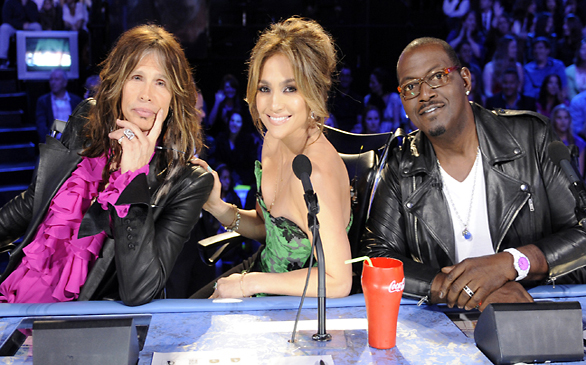 The current “American Idol” team will maintain its softer and gentler approach for Season 11 - unless you mention any other singing competition shows. Executive producer Ken Warwick disses Leona Lewis, a winner on the British version of “The X Factor,” as a “one-and-a-half-hit star for 10 minutes.” Judge Randy Jackson slams contestants on “The Voice” as “second-chance people” and vows that his show would never stoop so low as to steal “Star Trek’s” swiveling chairs.

Fox network’s head of reality TV, Mike Darnell, also oversees the new American “X Factor,” but goes out of his way to point out that “Idol” is the one and only phenomenon. “Everyone else chases this show,” Darnell said. “This is the gold standard.”

Why all the defensiveness? Because for the first time, “Idol,” which returns to Fox on Wednesday, is following two similar hits. The question of audience burnout rings as loud as Steven Tyler’s wardrobe.

Not that “The X Factor” or “The Voice” have matched the juggernaut’s numbers. Each averaged 12 million viewers in their debut runs - half as many as “Idol” pulls. But “X Factor” is this season’s No. 1 new unscripted series, while “The Voice” was tops among rookie programs last year among 18- to 49-year-olds and will launch its second season on NBC directly after the Super Bowl on Feb. 5.

Executives do their best to ignore the fact that England’s “Pop Idol,” the show that started it all in 2001, was canceled after just two seasons because of “The X Factor’s” popularity.

“When ‘Idol’ started, there was only one of its kind, and the truth is now there’s a lot of these shows,” said “Idol” producer Cecile Frot-Coutaz. “But in the end, competition is good. It means you have to raise your game.”

Fox Entertainment president Kevin Reilly is doing his part by trying to lower expectations, predicting that “Idol’s” ratings will drop this season. In fact, viewership has been eroding for more than five years. “We’ve done the statistics before on how ‘Idol’ could go down double-digits for the rest of its life cycle and still remain the No. 1 show on television,” he said. “There have been too many ‘Idol’ (obituaries) filed prematurely. We’ve got to really see where that ends.”

If the “Idol” team has some perspiration above its lips, then “The Voice” gang must be drowning in sweat. The show got off to a rocket start, hailed as innovative and fun, particularly for the twist in which judges couldn’t see the auditioning singers. But once that quirk disappeared, the show settled into a creative rut. Its season finale, which should have drawn peak numbers, attracted fewer viewers than the show’s season average.

This time around, “The Voice” will try to keep viewers hooked all the way to the end by recruiting Alanis Morissette, Lionel Richie and even former “Idol” winner Kelly Clarkson as celebrity mentors. The judges will also continue to stress that they’re a heck of a lot nicer than that grumpy Simon Cowell.

“We all told him (executive producer Mark Burnett) that we’re not signing up for this show if it’s about ridiculing someone or poking fun at their inability to sing or lack of talent,” said judge Christina Aguilera. “That’s not in support of the business. It’s not in support of anything we do as artists, and we wouldn’t be a part of that.”

Burnett refuses to predict how all the shows will do in the ratings, but said he believes “The Voice” sticks out because it doesn’t spotlight novelty acts - aka the pants-on-the-ground guy.

“We replaced the idea of finding people who really cannot sing and know they can’t sing and making a mockery of that,” he said. “That was the hook on some other shows, and this show got rid of that completely. The coaches are only going to see good people or great people.”

“Idol” producer Warwick isn’t about to stop inviting contestants like the “pants on the ground” guy. In fact, he insists he’s not looking much at any of the competition.

“This is an express train,” he said. “Once you get on this, it’s two shows a week, sometimes three, for four months. If you take time to sit down and say, ‘Hmmm, I wonder what they’re doing on the other side? Let’s have a look,’ you’re lost.”

In other words, everyone involved on these shows will continue to swear publicly that they’re not worried, while privately losing sleep at night.