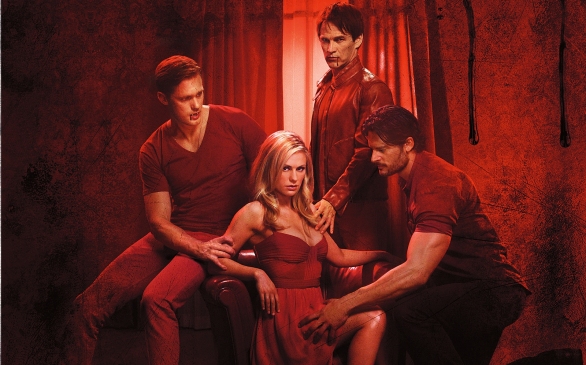 The cast of the sexy HBO series “True Blood”
(Credit: Courtesy of HBO)

So says Frank Gallagher in his opening monologue of the first episode of Showtime’s hit new show “Shameless.” This seems to be the story for a host of raunchy shows that have gained popularity in recent years. You can walk into any entertainment store and find merchandise from shows like HBO’s “True Blood,” which is certainly no stranger to gore, sex and profane language.

So, why is it that these shows are so popular? What makes them so appealing? And should your family be watching them? They’re certainly a far cry from your average family television night. Perhaps people are drawn to these shows because they’re more reminiscent of life as it really is. But are these shows honestly any closer to real life than an episode of “How I Met Your Mother” or “Friends?”

For instance, in an episode from season one of Showtime’s “Shameless,” Frank Gallagher helps his children steal an elderly woman from a nursing home to avoid being arrested for cashing his dead aunt’s social security checks. When was the last time you spoke to someone who has to steal a dead relative’s money? Have you ever had a homosexual affair with the owner of the convenience store that you work in? Maybe you know someone who has become entangled in an intense love quartet with two vampires and a werewolf. The latter may not have been the best example, but the fact is that no matter how believable they attempt to make these situations, some just aren’t.

However, it seems that the true reason people watch these shows may be that they’re unafraid to do what sitcoms can’t. They don’t hesitate to show you sex. They don’t censor language. People die on screen rather than off. Real life situations are combined with incredible circumstances, and the result is often quite spectacular. But the shows don’t lose the uncensored, raw feeling that life often presents. Viewers are enticed because they want to escape their day-to-day lives with fantastical stories and situations without losing the “real” feeling.

Whatever reason viewers have for watching raunchy television, its rise in popularity cannot be denied. The target audience for these shows is widening daily and with more and more series being produced each year, it shows no signs of slowing down any time soon.

Many people are still turned off by the utter disregard for censorship that these shows proudly display, but will that be enough to stop popular sitcoms from going down the same path? Shows that have recently begun airing are already pushing the envelope as far as sexual content and language. For example, the script for the new, hit show “2 Broke Girls” is mainly composed of sexual innuendo-laced one-liners. In the near future, you may find yourself watching shows on channels like NBC and CBS that rival the raunchiest of shows in HBO’s current line up. Are viewers ready for this drastic change? And what sort of backlash might something like “Shameless” receive for airing on network TV? Only time will tell.