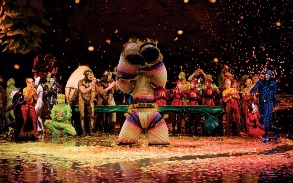 After a quarter century, CIRQUE is an industry that employs artists from all over the world to realize the spectacular productions. There are 21 touring shows in production right now with three in the LA area this month: IRIS ensconced in the Kodak, Michael Jackson The IMMORTAL TOUR and the upcoming OVO in Santa Monica, which opens on January 20th.

If you’ve been to a Cirque show, you know that beyond all the typical, and atypical circus acts, the most interesting aspect of their shows is the staging and costuming. For OVO, built around the concept of the ecosystem of insects, Cirque brought in Brazilian choreographer Deborah Colker and teamed her with musician Berna Ceppas and set designer Gringo Cardia, who created the egg that houses the “insect” performers.

I spoke to Vandel about how she finds the inspiration to make such a signature statement in her work, a style inspired by futuristic superheroes and by suits of armor from all eras. She says that the energy of the collaborative creative team, allowed her to come up with elaborate ideas. Her biggest mandate was making sure no human element, or skin appeared on the performers.

Vandal has always had a special affinity for the world of the insects. “I’ve always had passion for them,” she says. “When I was just a kid, I put rocks down around the yard near the fruit trees, and I lifted them regularly to watch the insects who had taken up residence underneath them. I petted caterpillars and let butterflies into the house.”

This is not about creating a fashion statement but rather evoking the feeling of the insects. How would a spider look? For Vandel is elegant and sexy. Cockroaches: a gooey and repulsive aesthetic. “The solution was to connect with the feeling of being face to face with a spider, a cockroach or a butterfly,” she explains. The dragonfly’s wings are evoked by pants made of veined lace, and the mosquito’s stinger by a ‘Mohawk’ of fine red stems. The ten crickets, which are the key insects in the show, have detachable legs that break away from their bodies. “I have a particular soft spot for these characters,” she says, “because their costumes are so sexy, graphic and vibrant.”

There is an overall elegant beauty, a vibrant world of color, music and energy. Vandel thinks it allows access to the “pure soul and love that the team puts into the work, and the audience can feel it while watching.”

Get Student Tickets For Only $32! Convenience fees included! All performances. Use code: STU

Click Here to learn more about the exciting world of OVO!