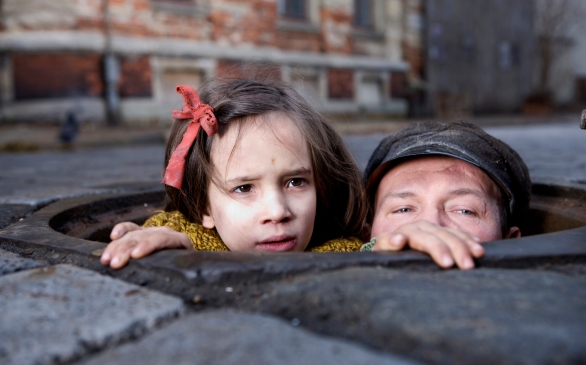 Set for a limited release in February 2012, In Darkness is the story of Leopold Socha, a Polish Christian and city sanitation worker during World War II. Caught in the chaos of Germany’s invasion of his hometown, Socha reluctantly finds himself the guide for a group of Jews fleeing persecution. With his knowledge of the city’s underground, Socha finds a means of escaping the Blitzkrieg, but not without risking his own life in the process.

“I feel as though I am the one who needs to tell this story,” says director Agnieszka Holland of the film. In a recent interview, Ms. Holland explained that the distinguishing characteristic of this film is the setting. Compared to other films about that period in time, In Darkness looks to use the frigid sewers of occupied Poland as a means of conveying emotion.

The most palpable force defining this movie is the crushing absence of light that remains on screen for the majority of the film. As the movie goes on, shots that contain light become increasingly rare, adding an element of hopelessness and fear.

A testament to the sense of realism portrayed on screen, much of the movie was shot on location, in the sewers beneath Poland. “Shooting in the sewer was a pain in the ass, especially in the winter,” said Holland of her time spent below the earth’s surface. She admits that the process was difficult and went on to explain, “For the cinematographer to make something really, really, dark, but at the same time to find a way that in a real way you see what you have to see to understand the story and be moved by the characters… that was not easy.”

A powerful production complete with authentic languages, and genuine performances, In Darkness gives a fresh perspective on a well-known tragedy. It is a cerebral yet historical journey into the foul smelling recesses that provided an improvised escape from tyranny. Debatably long winded with a run time of 2 hours and 25 minutes, the story line is no less gripping with an ending that seeks not to sugarcoat the explanation of what had actually happened.