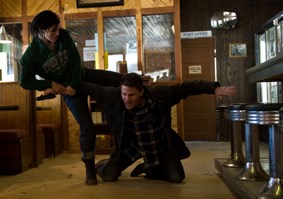 When an action thriller begins quietly, as it does in Steven Soderbergh’s newest film Haywire, it should be suggested to stay on your toes.

The film begins with a woman sitting in a typical Americana coffee shop in upstate New York. Soon, a “Friend” comes in to talk and carries on what seems like a pleasant conversation. It takes an immediate turn when he abruptly throws a cup of coffee in her face, and hand to hand combat begins between the two!

Soderbergh took a chance with plucking MMA fighter Gina Carano, and making her the film’s star. Haywire is loaded with A-list actors such as Michael Fassbender, Ewan McGregor, Michael Douglas and Antonio Banderas, but this time, they serve as supporting backdrops.

Mallory Kane (Gina Carano), a covert black-ops agent does secret jobs for the government when she is commissioned to a job in Barcelona for her boss Kenneth (Ewan McGregor). She is teamed with Aaron (Channing Tatum) for a rescue mission that is pulled off smoothly. Then in a simple follow-up mission with British agent Paul (Michael Fassbender), things go south. She realizes that she was double-crossed and left for dead. Now she is on a mission to find out who did her wrong and she won’t stop until she has the answers.

As they travel the globe from Barcelona to New Mexico, the film changes hues going from dingy yellows to cool blues. There are flashbacks for the first part of the movie as Kane explains what has happened to her to a man she has taken hostage (Michael Angarano). It’s a bit frantic, but amps up the mood.

The fight scenes in Haywire are anything but static and give you a sense of a real fight and what a real fight would sound and look like; no special effects or music, but true one on one combat.

Also, a great musical score gives the film a richer feel, which is used in unexpected moments. Carano has a cool and sexy voice, and a powerful presence - muscular and feminine at the same time, allowing you to truly believe that she is Mallory Kane. No one takes it easy on her because she is a woman, and even Kenneth’s character warns at one point “To think of her as a woman would be dangerously wrong.”

Haywire is in theaters now!