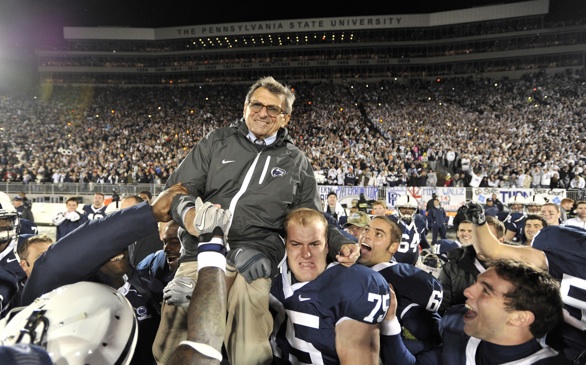 Joe Paterno, always a man with a philanthropic heart, gave us one last gift before dying Sunday morning.
He has inspired a nation to take an introspective look at the definition of saints and sinners, of how America loves to honor false Gods, and then bring them down almost gleefully when their mortal flaws are exposed.

The conversation about Paterno is passionate and polarizing. A legion of supporters mourn the death of a role model who molded thousands of young men, loved them, and taught them to be better people. Another group of people stand ready to spit on Paterno's grave, appalled that he did not stand up for innocent children allegedly molested by a monster in Paterno's midst.

The truth, as with most things, can be found somewhere in between those extremes.

Paterno gave back freely to the university he loved. His contributions reached millions, including a $3.5 million commitment in 1997 for a variety of academic programs, fellowships and scholarships. A library was built in his honor in 2000. They built a statue for him too, on campus.

But Paterno was also a quintessential control freak. Penn State's vice president of student affairs resigned in 2007 over "philosophical differences" that were later revealed to involve Paterno's over-zealous reach involving disciplinary decisions with his players.

He could be cantankerous and overbearing, as some of my friends in the bowls business experienced first-hand when Paterno came to town.

These are no great sins of course, but they rarely surfaced in the goody-two shoes Joe Pa "narrative" that the university very carefully crafted.

In the end, Paterno should be remembered as a good man with one tragic flaw: He failed to protect victims of child abuse. Whether it was misguided loyalty to the alleged monster, Jerry Sandusky, or to the Penn State brand, or perhaps a puzzling kind of naivete to what was going on behind closes doors, Paterno didn't do enough.

Although he fulfilled his legal obligation, he failed to fulfill his moral one. You take the extra step when vile allegations of child abuse surface. You don't sit on the information for a couple of days, as Paterno did, to avoid ruining the weekend for everybody.

Every single one of Sandusky's alleged victims has been scarred for life, not just for a few days.

Paterno shouldn't be mislabeled as another of Sandusky's victims. That would be insulting to the 10 boys Sandusky is charged with molesting over a 15-year-period.

But Paterno and his family did suffer greatly.

Disgraced and fired by a university that rose to national prominence, Paterno became a broken man in just a few months.

Football had always been his lifeline. He crumbled without it, much the same way Bear Bryant did after he retired from Alabama. Both died less than three months after leaving the game.

Paterno, like the Bear, took their programs to unprecedented prominence. No one in the history of Division I college football won more games than Joe Pa. Those 409 victories _ stretching over 46 seasons _ will be forever cherished by the Penn State faithful. They will also remember the 37 bowl games and two national championships won under Paterno's watch. More than 250 of his players went on to the NFL. And 78 percent of them graduated (11 percentage points higher than the national average).

And then the Sandusky scandal broke, and the Paterno narrative took a dark, ugly twist.

It is indeed a shame that his beloved university that once built him up chose to tear him down in the final days _ sending a messenger to his house to deliver a phone number to call. That's how Paterno found out he had been fired.

In his final introspective weeks, Paterno probably had too much time to think. The wonderful accomplishments probably gave way to that moment in time that it all started to unravel.

"I wish I could have done more," Paterno said in a statement released after he was fired.

There isn't one person on this planet who does not look back at a moment of regret. We all make mistakes. We are all flawed.

But in Joe Paterno's case, his mistakes played out very publicly. At 85 and in frail health, Paterno gave way to the forces rising up against him.

Nobody beats that monster, not even the winningest coach in major college football history.