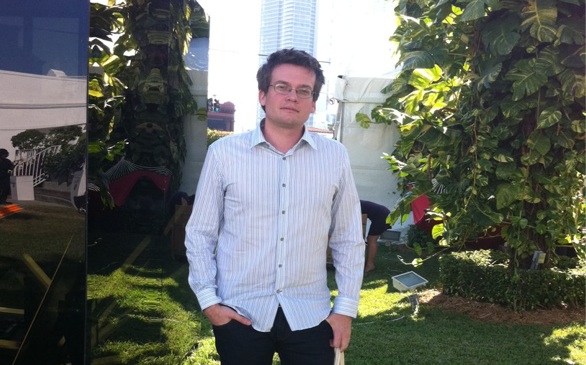 John Green is an author and a YouTube vlogger.

While watching one of his recent YouTube videos, it's immediately clear that John Green isn't just an author. He's a multimedia darling playing to 1,000-seat auditoriums of screaming fans.

Some of the crowds showing up for his mostly sold-out, 17-city tour in support of his latest young-adult novel are subscribers to the Vlogbrothers, the video blog Green runs with his brother that draws 7 million viewers per month. Others rank among his 1.17 million Twitter followers. Many have read his new bittersweet tragi-comedy, "The Fault in Our Stars," about two teenagers fighting cancer and falling in love. Since its release Jan. 10, the book has received 230 five-star reviews on Amazon.com and is about to debut at No. 1 on the New York Times chapter book bestseller list.

Few authors have so vocal a following, but Green has a rare combination of talents. A gifted writer who, at age 34, has already won two Printz honors and an Edgar Award for his previous novels, Green has a down-to-earth yet goofy personality that he actively shares with fans in the interest of building community. What's notable about Green isn't the fact he's so effectively leveraged the Web to build his readership. It's how he's done it _ with resonant authenticity.

"When you're writing a novel, you spend four years sitting in your basement and a year waiting for the book to come out and then you get the feedback," the Indianapolis-based author said during a phone interview conducted from a touring van, somewhere between Birmingham, Ala., and New Orleans. "When you do work online, the moment you're finished making it, people start responding to it which is really fun and allows for a kind of community development you just can't have in novels."

Not that you can tell from the Vlogbrothers' semi-weekly videos, which are extremely personable, rapid-fire rants on topics ranging from typos to religiosity and the occasional song about Angler fish, "I'm a very introverted person. Nothing that's happened has changed that," Green said, "but one of the reasons I write for teens is it's a real privilege to have a seat at the table in the lives of young people when they're figuring out what matters to them. To me, part of having that seat extends beyond the world of books because their lives extend beyond books. Teenage readers also have a different relationship with the authors whose work they value than adult readers do. I loved Toni Morrison, but I don't have any desire to follow her on Twitter. I just want to read her books."

That's far from the case with Green's fans, who've shown up on his current tour with cakes iced in "The Fault in Our Stars" frosting and tattoos quoting passages from his bestselling, Printz-winning, 2005 debut, "Looking for Alaska." Many of Green's fans are showing up with already-signed copies of the new book, 100,000-plus were pre-sold, and individually autographed, before the book's release.

"Teenagers have more intense reading experiences because they've had fewer of them," said Green, adding that as a teenager he wanted to go to New Hampshire and find J.D. Salinger. "It's like the first time you fall in love. You have a connection to that first person you fell in love with because it was so intense and unprecedented."

Many of Green's novels are about that very subject. "Looking for Alaska" is about a boy who falls in love with a suicidal girl. His follow-ups, "An Abundance of Katherines" in 2006 and "Paper Towns" in 2008, are, likewise, about boys falling in love with other bewitching and spirited young women.

All of those early novels were failed attempts at writing "The Fault in Our Stars," said Green, who first started the story in 2000 but didn't make real headway until 2009, when he met and became close friends with a 16-year-old fan of his books and videos named Esther Earl, who had terminal cancer "and whose humor and empathy and charisma and intelligence was really important to me and found a way into the story."

Green is quick to point out that Earl, who has since died and to whom "The Fault in Our Stars" is dedicated, is not to be confused with the book's main character, Hazel, who has thyroid cancer. "The Fault in Our Stars" is the rare young-adult novel in which friendships are forged in a hospital instead of a school, where the many "side effects of dying" are handled with heart and a healthy dose of gallows humor. Hazel notes early on: "When given a 20 percent chance of living five years ... you look around and think ... I gotta outlast four of these bastards." Like Hazel, who believes "the funny choice" is the way to tell sad stories, Green, too, decided to go with humor in telling what might otherwise be a story too depressing to read.

"Humor and tragedy coexist everywhere," Green said. "All the sick people I've known were still funny. I wanted to capture the fact that people who are chronically ill or in pain, those people have very difficult lives. It's not a joyous laugh fest, but those people are as alive and human as anyone else and part of being alive is being able to crack jokes."

The oldest of two brothers, Green grew up in Orlando, Fla. He studied English and religious studies at Kenyon College in Ohio and, for a time, he was a reviewer for Booklist Magazine in Chicago, specializing in literary fiction, books about Islam and books about conjoined twins. He is married to a woman known to Green's fans as the Yeti (she's called that by the Vlogbrothers but never appears on camera). The couple have a 2-year-old son.

He attributes his comfort with technology to his father who, in 1993, signed up the family for a precursor to AOL called Compuserve. Green was 16 at the time and "had a hard time making friends," he said. But on Compuserve, he became part of a student forum through which he met many people who continue to be his close friends. His seemingly early adoption of technology is only early "relative to other people in publishing. Publishing is not known for its digital innovation," said Green, who has a Facebook page but rarely updates it because he doesn't like the interface.

He does, however, like Twitter, where he says his real readership is closer to 237,000, and, of course, YouTube, where Green and his brother, Hank, first morphed into the Vlogbrothers in 2007, filming and editing their clips themselves. This year, the two will expand their offerings with two new staffed YouTube channels underwritten by Google. Hank is working on a science program. They'll be creating educational videos about world history, biology and physics for something called Crash Course, launching Jan. 27.