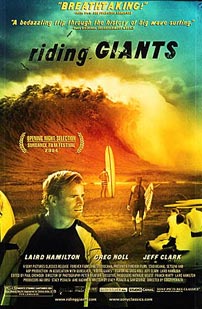 Setting out to disprove that all surfers are renegade beach bums, Riding Giants documents and celebrates the history of big-wave surfing. Director/writer/producer (and legendary pro-skater) Stacy Peralta of Dogtown and Z-Boys fame offers up this heart-felt, reverent documentary focusing on three individuals — Greg Noll, Jeff Clark and Laird Hamilton — to drive home the point that surfing is carved out for a rare breed of athletes with whole-hearted dedication to the ocean’s physical and mental demands.

Beginning with the origins of surfing as told through drawings, vintage photos and typical beach music, the film pieces together the last 60 years of surfing. This history is told through intimate interviews with the above mentioned surfers and their respective "tribes" of men and one woman — Buzzy Kerbox, Darrick Doerner, Peter Mel, Evan Slater, among others — who are at the center of this sport.

Peralta follows surfing from Noll’s Waimea Beach, Hawaii, of the 1950s and ’60s, to Jeff Clark’s Mavericks at Half Moon Bay, California, that became popular in the ’80s, to Laird Hamilton’s contemporary adventures on the outer reefs of Hawaii and Tahiti. Though the few cartoon reenactments of treacherous storm rides becomes a bit kitschy, Riding Giants balances a solid narrative between interview and action. Peralta documents big-wave surfing using everything from paddling to tow-in methods by keeping the camera focused on these mighty athletes skimming (and sometimes wiping out on) the faces of jaw-dropping, 50-to 80-foot waves.

Interviews by Greg Noll steal the audience’s affection as he colors stories with anecdotes of insane courage and telling metaphors of love affairs with the sea. Ultimately, each carefully chosen interview — from Surfer Magazine editor (and co-writer) Sam George to the legendary Kelly Slater — adds an insider’s perspective, explaining how surfing creates not only a lasting relationship with the water, but also a lifestyle complete with a fraternity of like-minded people that regard surfing as a sheer privilege.