MuteMath: A re-invention of their “Odd Souls” 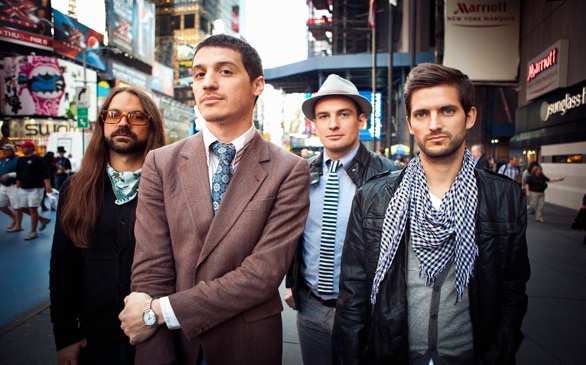 After the departure of longtime guitarist Greg Hill, the band MuteMath found themselves trying to figure out where to go next and how to move forward. Their newest album Odd Soul has proven that they navigated in the right direction. A bit of a departure from their traditional sound of electronica with strong vocals, this album has infused rock, blues, jazz, gospel, and of course their electronic sounds fans have grown to love.

I got the chance to speak with lead singer Paul Meany, one-third of the talented group. Roy Mitchell-Cardenas, and Darren King complete the creative trio. I wanted to find out their evolutionary process in creating this new, fresh album. The band originally started as a side project with Darren mailing some instrumental tracks to Paul in New Orleans where he would add on bits and pieces and then send it back. “We eventually added a bass player and a guitar player and something started to happen when we performed live. It felt right and the songs began to evolve on the road.” Meany continued, “We turned this electronic experiment into this four piece rock band. Darren still starts with an electronic part but now it’s a bit more organic and [King] finds a way to fuse what we do.”

After their first two albums, they were ready to create a third and as Meany put it, “Not being afraid to chase rabbit trails.” They sequestered themselves, put their heads together and went to work. Meany mused, “It was the three of us locked up in my house and we quarantined ourselves for nine months until we came out with something we loved.” It seems very intense, but Meany put it best, “The reward is when you chase inspiration blindly and it proves to be good in the end.”

With so many different sounds on Odd Soul, I had to wonder if this New Orleans native was influenced by the musical Mecca he gets to call home. “It is definitely responsible for a chapter in regards to groove. There is a spirit and a funk that’s consistent in New Orleans music, and it’s fun to bring that element…” One of the tracks that reflects this Gospel feel is a song titled “One More” and you feel as if you’ve gone to church!

They’re gearing up for a national tour that will be their biggest to date. Having done every late night show and played both small and large venues, I wondered if the excitement was starting to build about being on the road again. Meany’s enthusiasm started to really come through, “It’s gonna be the first proper tour. We plan on playing every song; a two hour set, the longest show we’ve ever done. We really wanted to raise the stakes both visually and musically.”

They also know that the audience is crucial in making it a positive experience for everyone involved. “They are so important to the show, we can practice until we’re blue in the face but the response of the audience makes things memorable. We have a great audience and push the show along.”

Being on the road has its ups and downs and every band has a horror story or two. Meany chuckled thinking back about one time in particular. “There was this one time we played a gig in a restaurant when we were first getting started right after a tornado had wiped out the town! We’re playing this gig and it was so awkward and no one was there.” He continued, “we were across from the kitchen under a banister. It was a bit inappropriate. They had just been ravaged and of course our tour stop was right after.”

The band has come a long way from their early days and this latest album is a reflection of where they have been and where they are going. Meany expresses it best, “any album is a snapshot of what you’re doing, so for us we were digging a little deeper in our own experiences. The motivation was to reinvent our original influences, some of our first memories of creating music.”