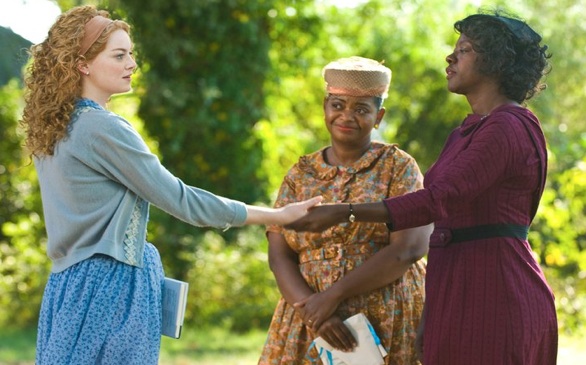 Emma Stone, Octavia Spencer and Viola Davis in The Help.

The Screen Actors Guild handed out three of its five film awards Sunday night to performers in the 1960s civil rights drama "The Help," injecting a little excitement into the Oscar race.

The cast of the film received the group's top honor, the SAG ensemble award. Viola Davis was named best lead actress and Octavia Spencer best supporting actress for their roles as black maids in the adaptation of the best-selling novel by Kathryn Stockett.

The triumph of "The Help" was seen as a bit of a setback for "The Artist," an homage to the black-and-white films of the 1920s that was also nominated for the ensemble award and has been regarded as the leading best picture contender in the Academy Awards. "The Artist" took home top prizes at the Directors Guild of America awards Saturday night and the Producers Guild awards last weekend.

SAG voters did name "The Artist's" Jean Dujardin best actor for his turn as silent film star George Valentine, which came as somewhat of a surprise. But with actors making up the largest branch of the Motion Picture Academy, which votes on the Oscars, "The Help" may steal support from the nearly silent French film and other best picture nominees such as "The Descendants."

Backstage at the Shrine Exposition Hall after "The Help's" big win, cast member Emma Stone may have put it best: "Guys, that's crazy," she said in disbelief as she and her fellow actresses were being corralled out of the backstage area. "What does this mean?"

Davis and Spencer added gravitas to the evening with emotional acceptance speeches to accompany their wins, both individually and for the ensemble.

"I want to thank all the people out there who went to support this movie and, after watching it, felt something. You felt compelled to make a change in your lives," Spencer said after accepting her statuette. "So I'm going to dedicate this to the downtrodden, the underserved, the underprivileged, the overtaxed, whether emotionally, physically or financially."

Evoking the issues tackled in "The Help" _ which centers on a group of black maids publishing their stories during the civil rights movement _ Davis, who triumphed over Meryl Streep for the win, added: "The stain of racism and sexism is not just for people of color or women. It's all of our burden. ... I don't care how ordinary you feel, all of us can inspire change, every single one of us."

Having bested George Clooney, Brad Pitt, Leonardo DiCaprio and Demian Bichir in the lead actor contest, Dujardin appeared a bit flustered as he took the stage. "It's too much," the Frenchman said before pulling out his notes in English. "I was a very bad student. I didn't listen in class. I was always dreaming. My teachers called me 'Jean of the Moon.' I realize now I never stopped dreaming. Thank you very much for this dream."

The supporting actor award went to Christopher Plummer for his turn as an elderly man who comes out of the closet in "Beginners." He was considered a shoo-in, having already nabbed a Critics Choice award and a Golden Globe. "What fun I've had being a member of the world's second oldest profession," the octogenarian said. "When they honor you, it's like being lit by the holy grail."

Plummer wouldn't opine about his Academy Award chances, saying the show is "miles down the road." In actuality, the Oscar telecast is only four weeks away. Though "The Help" gained momentum with its SAG victories, it still has an uphill battle in the best picture race, especially since most of its Academy Award nominations come in the acting and picture categories. Since 1981, every film to win a best picture Oscar has been nominated in the best editing category as well, but "The Help" was shut out of both editing and screenwriting.

In the television categories, the SAG awards were a near replica of last year's: The cast of HBO's "Boardwalk Empire" won best ensemble in a dramatic series for the second year in a row, and Steve Buscemi took best actor in a drama series again for his performance in the show.

Alec Baldwin was named best lead actor in a comedy series _ his sixth win in a row for his role as Jack Donaghy on the NBC comedy "30 Rock." Betty White, 90, nabbed the top comedy actress prize for the second year in a row for "Hot in Cleveland." On stage, she patted the statuette's rear and said playfully, "Oh, I remember you, sweetheart."

"Modern Family" took the award for ensemble in a comedy series, repeating from last year. Not even the cast members pretended to be surprised _ they had apparently rehearsed an acceptance speech that involved young cast member Nolan Gould riffing on W.C. Fields' quip, "Never work with kids or animals."
The only somewhat surprising win in the TV categories went to Jessica Lange, who nabbed her first SAG award for her role in FX's drama "American Horror Story." (Lange picked up a Golden Globe two weeks earlier.) The 62-year-old actress admitted during her acceptance speech that taking the role in the Ryan Murphy-conceived story was a "leap of faith" on her part.

The guild presented its lifetime achievement award to Mary Tyler Moore for her decades of work in both film and television. Dick Van Dyke, who co-starred with Moore in her first major television role when she was 23, presented the statuette to the 75-year-old actress.

The awards ceremony came just two days after the board of SAG approved a proposal to merge with another actors' union, AFTRA, creating a group that would be 190,000 strong. The membership of both groups has to approve the marriage, something SAG president Ken Howard took special notice of during the show, which was broadcast on TNT. "A single union gives our members maximum strength," he said. "A historic moment of unity is ahead."