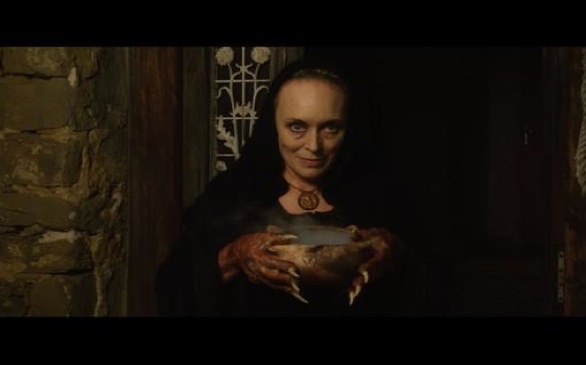 Catriona MacColl as the lustful witch in The Theatre Bizarre.

The Theatre Bizarre is a graphic horror film from beginning to end. What begins like a typical horror flick soon becomes an extraordinary piece of cinema. It starts with a young, beautiful, angelic woman who is infatuated with a local city theatre, which appears to have been unused for ages. As she enters the building, the audience learns the mystery behind the story through six tales of horror. One particular tale captivated me and left me scared. Frankly, it could have been a movie by itself.

The storyline of this particular tale is as follows -  In what seems to be the isolated segment of the French Pyrenees, a normal American couple leisurely travels throughout the countryside without expectation.  The couple is lost in this scenic area, and they suddenly stop, not knowing where they are.  Eventually, they become separated. The handsome American tourist subsequently turns to  a woman for help, who unknowing to him is a witch.  She offers the lost American some spiked wine.  Apparently, there is a spell in the beverage, and the lustful and voluptuous witch gets what she wants with a horror twist. Need I say more? No.

The Theatre Bizarre tales are directed by Richard Stanley, Buddy Giovinazzo, Tom Savini, Douglas Buck, Karim Hussain, David Gregory and Jeremy Kasten, The film is a must see for its creativity, gore, graphic scenes and passion for theater. It has elements of Hostel, Saw and many other successful horror movies, but The Theatre Bizarre surpasses expectations. It is an original true score for horror cinema -- one for the ages.

The Theatre Bizarre is now playing in select theaters.