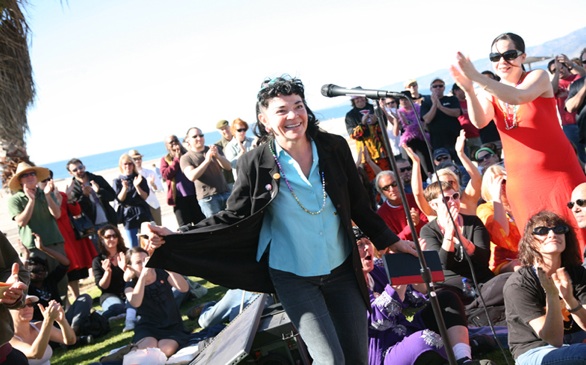 Suzy Williams, a sexy, humorous and passionate entertainer, has truly come into a place of her own after one helluva ride. While her life was already amazing, it wasn't until she turned 53 that she became a songwriter.  In 2007 she began writing everyday and has composed over 100 songs since.  Even as a stellar performer, it's the blossoming of her songwriting that makes her most proud.

Her message to the college audience today - “You never know when your gift is gonna come forth. You might be a late bloomer! I was the sorry fat girl, but I was ambitious to sing and I'm doing what I wanted to do.”

Like most at eighteen, Suzy pondered the direction for her life.  She didn't have much going for her, but she knew she could sing. While living in Boston she placed an ad in the paper that said “Red Hot Mama Looking for a Piano Player to Play With.”  Her plan was to create a combo to perform music from the 20's.  What she didn't expect was the lot of bongo players and strange guys that wanted to get laid responding to her ad.

After connecting with the great Stormin' Norman, they took their blues act up and down the east coast for twelve years.  They enjoyed success in New York, packing the club Tramps for three years, got a record contract and played Carnegie Hall.

Then disco came in and kicked their butt.  Hard times hit and the show business she had been immersed in no longer had a place for her. It was a very depressing time for Suzy. She took a topless dancing job which oddly enough helped pull her out of the sadness and forget her troubles.

She later connected with Bill Burnett, world-class songwriter for Grammy and Tony Award winning singers. They toured until Bill got a job in L.A. which prompted Suzy to move west and together they performed at The Open Fist Theater.  They quickly rose in the ranks and put out a few albums.  Three years later, she connected with Nick Ariondo, accordion virtuoso/composer and a double Grammy Award winner. They began a partnership and played Genghis Cohen for 10 years.  Suzy helped form yet another band, The Backboners, which still performs today as does Suzy and her Solid Senders.

Consistent cash flow can be a troublesome woe for musicians, so the necessity to reinvent oneself is ongoing.  Years ago, she answered an ad: “musician looking for a cook.”  300 people had responded to the ad.  She expected to meet a crazed, Mozart rock 'n roll character up to his knees in trash.  She walked in to find an elegant pianist by the name of Brad Kay.

Brad had played and led bands all over Los Angeles, even as a sideman in the Mystic Knights of Oingo Boingo.  Seeing his grand piano, she mentioned her love for and ability to imitate Bessie Smith. She was hired.  Suzy and Brad have been performing and working together for over a decade now.  Their most recent CD,  Enjoy the Ride, was released last year.

Suzy clarifies; “I had no desire to play the big stadiums.  I can handle any size crowd but I was born to create and sing.  Making a lot of money is optimal but it’s not the point.  When I crashed in the early 80's, my life was so pumped up with people whispering in my ear about stardom and show business. It led me on to think that I should be bigger than I was and wish for something I really didn't want. I didn't know how fabulous my life was going to be. Music gives me the drive to commune and contribute to culture.  It's my way of saying thank you for letting me live.”

Suzi Fox is the Founder & Developer of Artist From The Attic.org; an organization that offers a venue for musicians, writers, actors, artists and others to post their work for FREE for the world to see!

Interviews
How a trans indie-rock star made the record of their life, with the help of some new housemates
1,390 views

Interviews
Boys will be Baby Boys in the latest spinoff album from Hippo Campus
1,203 views