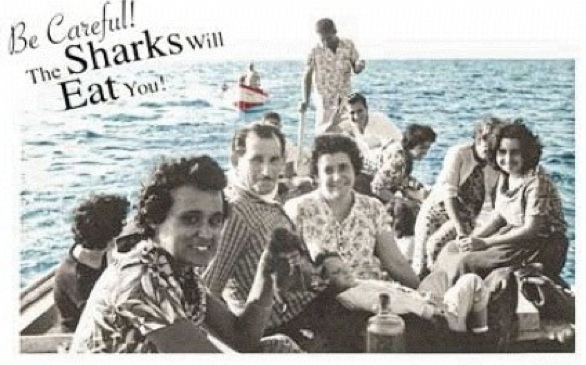 "Be Careful! The Sharks Will Eat You!" far exceeds my expectations.

Written and performed by Jay Alvarez, this one-man play pays tribute to his life and family. From beginning to end, his performance conveys the messages of love, support, peace, tradition and hope for a better life.

Set against the backdrop of the fall of Fulgencio Batista and the well-known rise of Fidel Castro, Alvarez's father executes the near impossible for the family to live a better life: an imminent move to the United States.

Although a drama portraying quite the intimate moments, "Be Careful" is also a comedy that delivers gut-busting laughs, from Alvarez repeating "S.O.B." in Spanish to him singing and dancing to the song "Quimbara" by acclaimed Cuban salsa sensation and queen of the genre, Celia Cruz.

But how well does Alvarez perform the story? He does it in a fearless, spectacular manner with positive energy, pride and inspiration. With mannerisms and stage presence like Robin Williams, a comparison between the two comedians can be easily made.

Alvarez misses the sexy, tropical, beautiful landscape of Cuba, which is apparent in his almost reverential reminiscences. The show is garnering so much buzz in fact, that a stint on Broadway is becoming an increasingly likely possibility; jazz musician Paquito D'Rivera is set to compose a full-length score.

"Be Careful! The Sharks Will Eat You" is the must-see play of this winter in Los Angeles.