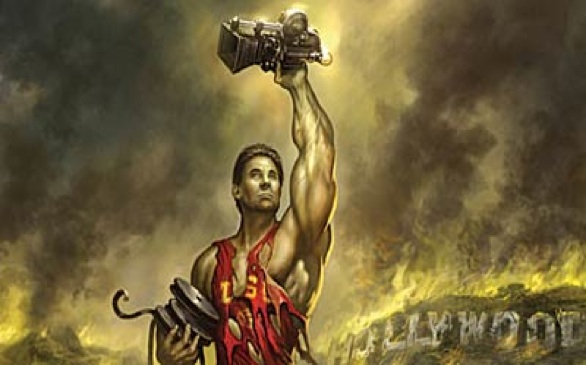 I've always thought of advanced degrees in filmmaking as finishing school for misfits. Brilliant misfits, some of them. But misfits just the same.

Into the film school world stumbles Steve Boman, a former reporter seeking a midlife U-turn. Astoundingly, even to him, the father of three has been accepted into the graduate program at the University of Southern California's esteemed School of Cinematic Arts, where he will compete against hipsters half his age in the series of ever-larger student films over the course of a three-year program.

If you're thinking "Paper Chase" for the movie set, you wouldn't be far off. USC is, after all, the equivalent of the Harvard Law School of filmmaking, with all the quirks, all-night study sessions and faculty mind games such elite institutions seem to produce.

In "Film School," Boman writes casually and very personally of his experiences. He doesn't pull a lot of punches, but neither does he mock his cohorts and instructors, though the temptation must have been mighty. In true moviemaking fashion, he sets the scene and lets it play out for the reader:

"(Our instructor) appears to be sleeping or meditating or just plain ignoring us. We students file past and quietly take a seat. We hardly know each other, much less who this guy is. We think he's the lead instructor, but maybe he's a wayward parent or a homeless guy. A couple of my classmates look at me questioningly, wondering if I have a clue what's going on. I shrug. I know as little as they do."

Boman's early experiences in his various classes make for challenging little scenarios all their own. Without much experience, for instance, the film editing software confounds him more than it does his younger and more experienced colleagues.

As a former journalist, he seems to have an easier time with the curriculum's writing demands. A natural storyteller, Boman ends up with uncommon success in the program, but not without a lot of stumbling along the way.

"True to form in my first semester of film school, the highs and lows are quickly swapped. It's an amusement park ride, a veritable manic depressive's paradise."

And that, turns out, was the easy warm-up lap. After his first year, Boman decides to drop out, citing financial strains and the often unreliable classmates fixated on producing zombie films.
Then, in a real-life plotline most screenwriters would dismiss _ he decides to return to school six months later, only to suffer a stroke after a long drive back from the Midwest.

Now, really on his own, Boman faces a low point in his midlife journey. Doctors diagnose a congenital hole in his heart and an autoimmune disorder that probably contributed to the stroke. None of it is immediately life-threatening, but neither is it comforting _ nor even 100 percent certain. There may be other medical issues as well.

Add it all up and Bowman is 42 years old, spending a small fortune on film school, residing 2,000 miles from his family and facing uncertain health.

Boman's physical challenges eventually begin to ease. But his personal setbacks reinforce what he determines about film school and the entertainment business as a whole: Nobody succeeds without an astounding amount of passion and perseverance.

In fact, Boman eventually excels, amid directing partners who fail to show, instructors who both badger and inspire him, and the economic stresses that an expensive grad school place on him and his young family.

After figuring out how to manage the film production program's feverish pace, he begins to nail his student films and earn the respect of his younger classmates.

By the time he graduates, Boman has sold a medical drama to a network, a feat accomplished during a class pitch session to industry professionals, one of the many perks to a place like USC. The pilot, "Three Rivers," eventually makes it to air.

"I tell the bartender to give me a drink of single-malt scotch," he writes. "I order the biggest steak they have. I order drinks for the guy on my right and the couple on my left. When they ask me what the reason is, I tell them: 'I just sold a television show to CBS.'"

To say this is almost unheard of for even a USC film student would be selling it short. Yet, it does give Boman's rigorous grad school experience _ which nearly killed him _ a true feel-good ending.

And isn't that what Hollywood is all about?