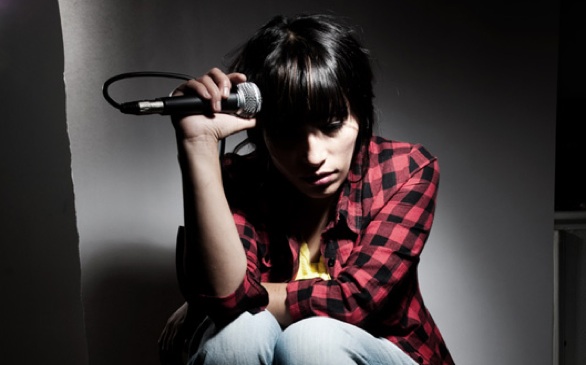 She’s a poet and a rapper who’s artistically different. This is Ana Tijoux, who just launched her sophomore album titled La Bala.

A French-Chilean musician, Ana Tijoux achieved stardom with her appealing Grammy-nominated  debut, 1977, which included the eponymous smash hit (played almost everywhere, including TV shows) of the same title. Known to rap in both Spanish and French, she discovered the hip-scene of Santiago, Chile when she learned to rhyme in French.

She is unique, resplendently talented, with a gift for rhyming lyrics with profound messages. With La Bala (The Bullet), Tijoux delivers 11 fresh tracks. On it, there are six different collaborations that feature Academy Award winning musician Jorge Drexler in “Sacar La Voz” (Take The Voice Out) and Cuban hip-hop group Los Aldeanos (The Villagers) in “Si Te Preguntan” (If They Ask You), among others.

Two stand-out tunes of the album are “La Bala” and “Shock.” Both are rather mellow, filled with jazz beats, urban themes and are future classics in-the-making. With a handful of showpieces on just this one album, La Bala will likely be the standard-bearer in this genre for years to come.

Despite what detractors might say, Ana Tijoux is currently the best female MC that hails from South America. A force to be reckoned with, Tijoux is the Lauryn Hill of Latin America in many ways. La Bala, which smells like Grammy material for the 34-year old, is musically sounder and stronger than her debut record.