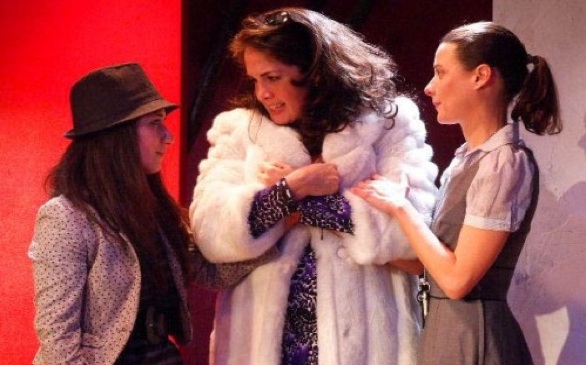 These days, it's impossible to turn on the news without mention of drug cartels' takeover of Mexican cities. In "El Nogalar," playwright Tonya Saracho transforms Anton Chekhov's 1904 Russian play, "The Cherry Orchard," into a heartfelt story of a Mexican family whose legacy is threatened by the town's mafia lord.

After years of living in the U.S, the Galvan family returns to their hometown in Mexico only to find their beloved home gone. The oldest daughter Valeria (Isabelle Ortega), who stayed behind to look after the estate, and its grandiose Pecan Orchard, is slowly falling apart, desperately trying to hang on to a shred of hope. When her mother, Maite (Yetta Gottesman), and Americanized younger sister Anita (Diana Romo) arrive, they fall into an irrational sense of denial.

“El Nogalar” has a very entertaining array of narratives from each of the cast members. Making all the characters women, with the exception of one male, was but one twist Saracho added to her adaptation. The female factor was a strong driving force of the play, creating moving dynamics between the characters.

Your heart will immediately feel for Valeria, who is almost a ghost to her mother. A 29 year old that left her life in the U.S to oversee the estate, her closest companion is her housekeeper, Dunia (Sabina Zuniga Varela), a charismatic young woman with dreams of leaving the country life. Encouraged by Dunia to marry Guillermo (Justin Huen) and be happy, Valeria never gets a chance to feel true happiness. Instead, she becomes her mother's wrangler.

The mother, an energetic woman with an untamed streak about her, is anything but empathetic to her daughter's sacrifice. As Valeria lives in the background of her own life, most of the mother's attention goes to her youngest child, who hardly remembers life in Mexico. A bit more sympathetic towards her older sister, Anita can't shake off resentment towards their mother who wants to live a luxurious life they can't afford.

When the family is offered a large sum for their land, the women clash on deciding whether to be left behind or adapt to their changing world. The story really becomes about a woman's pride threatening her family's well being.

Heart wrenching until the very end, “El Nogalar” tackles the emotional upheaval organized crime has caused Mexican families. It will have you reflecting on your own family legacy and how it can be lost.