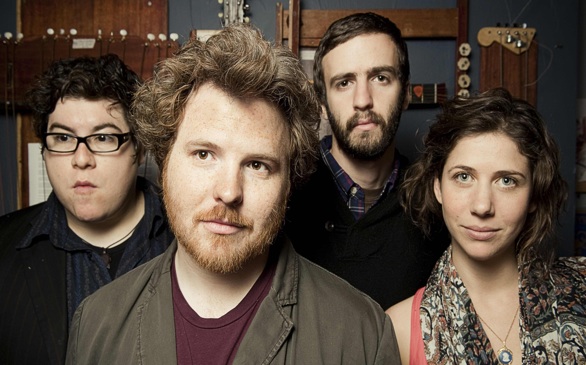 “…I set out to break all the rules, and then write new ones and then break them all again.”

Los Angeles-based band, Archer Black, is the brainchild of the composer Dustin Morgan, also a classically trained musician at California State University of Northridge.  Comprised of eleven members, they collectively take you from Black Sabbath to Bjork and from Steve Reich to Steve Albini, all within a matter of minutes. Such disparate influences might seem inharmonious at best, but in this case, they forge a moody musical rhapsody that sets them in a category of their own. Post Planetary Records will release the band’s debut album, Forgiveness Is A Weapon, on February 7.

Forgiveness Is A Weapon may sound like a political statement, but the real concept is far from that. “I did not intentionally set out to write an entire record of songs about war. In fact, none of the songs are really about war.  Really, the record is made up of love songs.” Citing the song, “The Bomb,” Morgan clarifies that the tune is actually about when two become so wrapped up emotionally, it’s essentially an arms race where either one of you have your finger on the button and can destroy each other. That’s what makes it beautiful. This is really just a reflection of the time.  It’s part of the reality right now. The imagery I use is taken from the reality I live in.”

The initial songwriting for the band began in 2008 while the recording began in 2009, but it wasn’t until three years later that Forgiveness Is A Weapon finally came into fruition. The reason for the delay was a combination of scheduling conflicts between the eleven members and slow and steady fine tuning that Morgan patiently detailed in order to create the ideal work.

“One thing I’ve learned from working in the studio with other people is that you can’t compromise. Twenty years from now, you won’t remember that this took you six months to do extra vocals, but you will remember if there’s something you don’t like,” explains Morgan.

The vision for Archer Black became clear to Morgan when he began studying with Victor Vanacore, orchestrator and arranger for Ray Charles and Johnny Mathis among others. As Morgan began arranging his music for strings and brass, the music became a compulsion. “My original intention was to learn how to orchestrate for film,” says the lead singer, “But after getting deeper into what Vic does, I got the idea to do a pop record that included a large ensemble.”

Morgan set out to create music in modern form, but with the soul and beauty of the past, allowing the compositions, not the instrumentation to define the music as modern. In order to achieve that feat, he formed the collective Archer Black. At first thought it seemed hard to have almost a dozen talented people with creative ideas joining together to come up with one cohesive and impressive sound. Morgan explained that in this case, the band was more like a ship and crew.

“I put the notes in front of them [his band] to play, but they are all people that I respect and who respect me so there have been lots of opportunities to voice their opinion. There’s no way to throw 11 people on stage without having someone steering the ship,” says Captain Morgan, –no pun intended-  “The great thing is that they’re not going to let me run into an iceberg just because I want to.”

The main conflict was obviously to marry the classical orchestral sound with that of a modern rock band.

“When I started writing this music, I kind of set out to not have any rules. Better yet, I set out to break all the rules, and then write new ones and then break them all again.  In the past, I’ve always felt restrained by the rock band format,” explains long time bassist of The Autumns. “I think, ‘well it will never come across live, or we can’t put it on a record ‘cause how would that be performed?’”

Recently it’s become a trend to throw in strings in a rock band with the hope of creating an authentic sound. Morgan understands this and is committed to skillfully fusing the art of composing with the rock band idea without sounding trite.

“Where some people miss the mark is that they think that adding a classical instrument adds emotional depth to the expression as if it’s like icing or this decorative sugar rose they put on top of the cake,” says Morgan. I worked backwards and thought to start with a string quartet to let the rock shine through that everyone’s a part of.  This [Archer Black] was an opportunity to do everything I wanted to do. Why compartmentalize things when you can just put it all in a pot and make it work.”