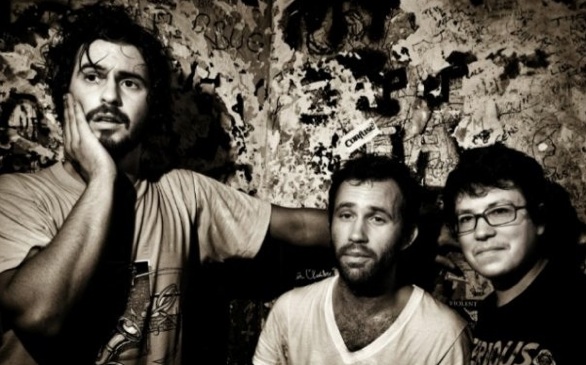 Austin, Texas’s White Denim has been making music since 2005. The group has achieved moderate success and is now ready to relish in the spotlight with the release of its most recent LP D (Downtown Records) this Spring.

Previous to D, White Denim was often known for self-recording, countless musical influences and multifaceted song structures. This time around, the group has used a different formula, and the results are short of impressive. Not bad for frontman and former English student, James Petralli.

“Personally I never really expected to be a fulltime musician. I was driving a truck and saving up to finish my teaching certification. I thought that I’d probably end up teaching English somewhere,” says Petralli.

However, teaching took a back seat as soon as White Denim launched its first full-length record, Workout Holiday (2002), and even more so now with the release of their latest effort, D (2012).

With a new album, a new member (Austin Jenkins) and a distinct ability to take complex riffs and make them sound beautiful and effortless, it’s no wonder the group has garnered comparisons to ‘70s musical masterminds like King Crimson and Grateful Dead. James took a time amidst the group’s tour to speak to Campus Circle regarding everything from new musical strategies to intimate thoughts.

“I didn’t go to school for music, but the other members did. I studied English in college. Some of us are trained, but we don’t really have that approach. None of us really listen to contemporary rock ‘n’ roll.  The older rock ‘n’ roll era is what we’re into so it’s a pretty natural comparison. We definitely listen to that more than Foo Fighters or something like that. I take it as compliment. It used to be a really big deal for rock bands to play in different styles and be serious about musicianship. We appreciate that and try to apply that to our own band,” says the singer.

The new album, simply titled D. may be construed as an evolution of the band as one entity as well as the continued marriage between Petralli’s two loves: English and music.

“I’m sure from a lyrical standpoint a lot of what I was reading made its way into it [the new album]. I was reading Sherwood Anderson and Gertrude Stein. Since I left school, I’ve been really bad about reading so around this time I started reading quotes and little pieces of poetry. It was my way of getting back into it,” he explains.

The new tunes started out with his acoustic guitar after a year and a half of touring the record Fitz. Although Petralli is the band’s primary writer, he admits the group is constantly evolving and plans to make more of a collective effort with the music writing process.

“We’re starting to write collectively a little bit more now. But there are probably only two or three tunes in the catalog that we sat down and worked on together. I think we’ll get more into a collaborative in the future,” states the singer.

This record seems to flow fluidly like liquid genius, however Petralli explains that there were some pretty difficult tasks the band had to face during its making, the main one being the pressure of the music industry.  Nevertheless, White Denim managed to find a way to make pressure work to its advantage.

“There was a lot of pressure on the business side to make something more that advances sonically. Our early recordings were done in a home studio, and we were more relaxed about how we were capturing sound and building material,” recalls Petralli. “We worked in a different studio, on a couple of different tunes with the producer and an engineer that was giving us input on some of the sounds that we were using. I think you just have to be open to new ideas and be willing to try them. It’s really about patience.”

The Texas rockers are known for their style and sophisticated musicianship and not for giving outrageous antics filled performances.  He explains that his main focus is to deliver quality music to his audience rather than an eccentric act or adopting an over-the-top persona.

“I feel like the band likes to focus on delivering good music and having a good time. But I’m starting to feel like maybe I should say something to people in between songs,” he says thoughtfully.  “I’m not super comfortable with that personal kind of connection or trying to establish that on stage. I do believe it’s important to give a good show. The parts are really physically demanding…, but as far as being a comedian on stage or really personable, I’d be lying if I didn’t say I needed to improve in that area. I never like it when I see bands with a really loud member. I just wish people would play the music.”