Trojans, Bruins to Battle on the Ice Again 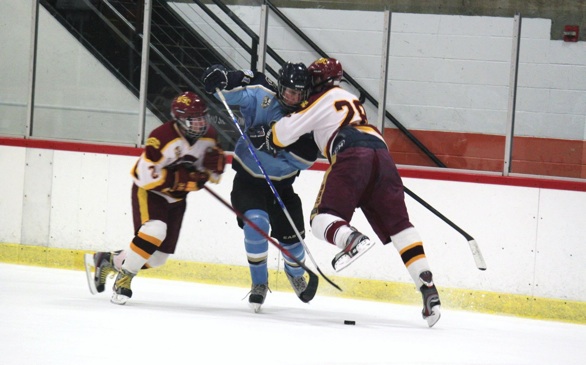 A victory will be more than just a victory for the team who wins.

Attaining confidence and bragging rights are on the line. More importantly, the Crosstown Cup is up for grabs since both the USC Trojans and UCLA Bruins hockey teams have topped each other twice thus far this season.

“To beat the Bruins, we need to stick to our game,” defender and captain Noah Comisar says of the upcoming Feb. 4 affair. “…If we show up and play the way we know how against these guys -- no question, we win decisively.”

UCLA took the first two games versus USC, winning 4-3 after a shootout on Oct. 15 of 2011 and then by a score of 5-4 Nov. 8.  Still, the Trojans fought back in the last two affairs where the squads faced each other in back-to-back matches.

“Year after year, our UCLA games are always the most exciting and most emotional,” USC junior defender Dante Caravaggio confesses about the intriguing match-ups.

The Trojans defeated the Bruins 3-1 on Jan. 20 before comfortably coming out on top the following night 7-3 at the Valley Ice Center in Panorama City.  Now, game number five is approaching in this best-of-five Crosstown Cup series.

“In order to win, UCLA must be willing to grind it out in the corners and sacrifice everything it takes in order to win the major one-on-one battles,” UCLA right wing and captain Michael Carder acknowledges.

But before squaring off against the Bruins, the Trojans host Cal State Fullerton (Feb. 3); a win is a must to boost the morale of the club prior to facing their rivals.

On the other end, UCLA hosts Loyola Marymount the night before. Carder, who classifies his team as resilient, is to play a key role in motivating the Bruins since the Trojans are a threat.  “The threats that USC pose are an effective dump-and-chase system, as well as an oppressive penalty kill,” Carder shares.

Junior left wing Adam Zacuto, USC’s leading scorer, will be an imperative element in the host’s potential road to victory over the visitors.  “Adam has been consistently our most dangerous offensive weapon.  Every time he steps on the ice there is the chance we will score,” Trojan head coach Jeffrey Langille comments. “I would say that his ability to find the back of the net in general is the best thing he has done, as it forces other teams to modify their game plan to and focus on trying to contain him.”

Zacuto, however, attributes his success to his teammates, specifically two linemates.  “This season I have been lucky enough to play with two tremendous linemates; I play with James Huebner (junior right winger) and Cory Newman (freshman center) on my line,” he says. “Both players are tremendous playmakers and have contributed to both my success and the success our team has experienced this year.”

The Bruins have already beaten the Trojans twice this season, and Carder recalls that vividly.  “Beating USC at the Honda Center and Staples Center,” he says after asked about the best things the team has done this year. “The major reason we have accomplished this is because of everyone buying into the team concept, which is difficult with club hockey.”

Carder leads the Bruins offensively, and he sounds very competitive in looking to gain as much production as possible in order to help UCLA thrive on the ice.  “It will be there Senior Night, and we plan on making it very emotional for them,” Carder adds.

“This game has huge implications for us.  It’s a winner take all affair for the Crosstown Cup on our home ice, and tensions are running high between the teams,” Langille says.