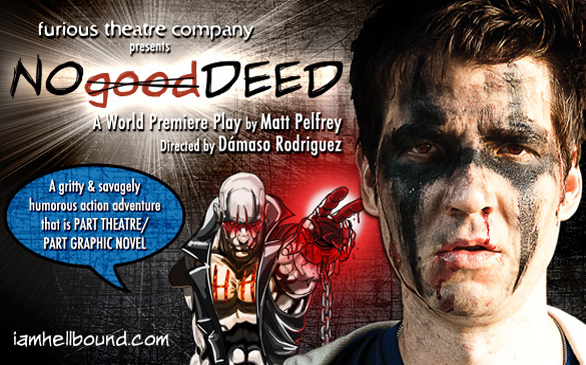 In the world premiere of its newest stage production, The Furious Theater Company seems to have bitten off more than it can chew. A highly technical show featuring a complex plotline and intense character transformations, “No Good Deed” is a dramatic feature that is part play and part graphic novel. Having taken four years for this project to reach completion, the performance is unexpectedly confusing and offensively naïve, derived from a storyline wrought with holes.

The dramatic vision of writer Matt Pelfrey, “No Good Deed” relies on a great deal of technical features in order to make this performance jump from the stage the way a good comic would jump from the page. The problem with Furious’ production of “No Good Deed” is that the technical devices utilized by the company lack polish, as if the crew were overwhelmed by the demands put on them by this script. Glaring technical oversights within the show include improperly mixed microphones and out-of-sync audio that served to muddle the expressions and lines delivered by certain characters.

From the perspective of plot, it faces the same issue. There is simply too much going on. The story follows the tragic demise of three ordinary men recognized as heroes, each for a separate occurrence of heroism. While these three subplots are cleverly introduced, they tend to distract from one another. The audience cannot focus on whom the main conflict is actually with. From here the story wheels into a comic-inspired spiral of delusions, super powers, melodramatically excessive drug use, and time travel, yes, time travel. There are so many different weak plot points strewn together into one single show that by the middle of the second act, very little actually makes sense to the audience. It’s just confusing.

Although well intentioned, “No Good Deed” is an overzealous train wreck of a play. Muddled by ambition and clouded by technical demands, the script lacks maturity, as if it still needs to go through a great deal of revision before it can be properly performed. As a result, the Furious Theater Company is left looking like a rag tag band of prima donna theater junkies that lack the integrity needed to condense one’s ideas and deliver a succinct show. With some work --a lot of work-- the show could be worthwhile. For the time being however, “No Good Deed” is simply no good.