'The River' Premieres Tonight on ABC 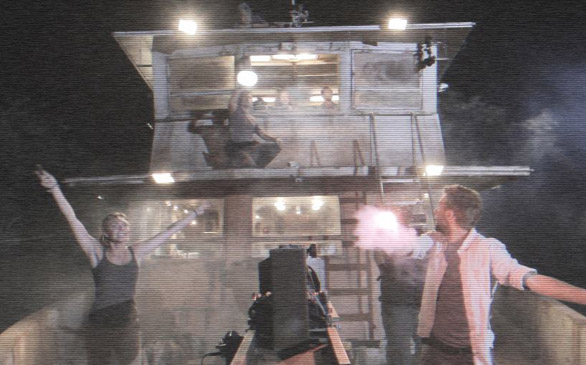 Cast of "The River."

"The River," which premieres Tuesday on ABC, is a nifty supernatural adventure tale set in mysterious river-riven regions of the uncharted Amazon. Topographically speaking, it is "Lost" inside-out.

The story is this: Emmet Cole (Bruce Greenwood), a world-beloved, globe-trotting "Crocodile Hunter" sort, has gone missing. Six months after his disappearance, an emergency beacon begins suddenly transmitting and his former crew and co-stars, including his wife and son and the daughter of his also-missing cameraman, head into the jungle to find him, with TV cameras rolling. Emmet's television catch phrase, "There's magic out there," will prove to be presciently literal.

The fictional series Emmet hosted was called "The Undiscovered Country," which is from "Hamlet," a spook story older even than "Poltergeist": "The undiscovered country, from whose bourn/No traveler returns," meaning death. There are echoes of "Hamlet" in the character relations as well, with brooding son Lincoln (Joe Anderson) having reluctantly returned from his studies; mother Tess (Leslie Hope) once adulterously involved with ambitious producer Clark (Paul Blackthorne), or so we are to think; and childhood friend Lena (Eloise Mumford), like Ophelia, having been warned by her father that the melancholy heir was trouble. ("There may be something to that," Lincoln admits.)

For all these elevating parallels, "The River" in its early hours doesn't ask to be taken more seriously than as the long-form B-movie it is. Made with ingenuity and verve, it substitutes the half-glimpsed and suggestive for the in-your-face and explicit, and concentrates more on the buildup than the payoff, the fear more than the fright.

Like many contemporary horror shows, it's a scrapbook of favorite bits clipped from earlier ones. Lines such as "It was no animal," "There's something you need to see" and "Hell, according to every map ever made this place doesn't even exist," are like familiar old friends whose banality you do not merely excuse but actively cherish.

Co-creator Oren Peli (working with TV veteran Michael R. Perry) was the writer-director of the big-screen thriller "Paranormal Activity." (The first two episodes are directed by Jaume Collet-Serra, who made "House of Wax" and "Unknown.") Like that film, and many others before it _ and after "The Blair Witch Project" _ "The River" purports to be made from documentary found footage. And if this is not the novel device it once was, or interesting at all, really, it gives a dusting of grit to the image and remains a friend to filmmakers on a budget.

Steven Spielberg is the brand-name executive producer. I blame him for the Looks of Wonder with which the adventurers regard the dragonflies that swarm around their heads as they skim along a mysterious river. (Keep your eyes on the flies.) But he is also the man who made the unendingly influential "Jaws," another horror movie set largely on a boat. And as the story of a search for a man who has gone upriver, melting into the jungle and, perhaps, into madness, there is also a lot of "Apocalypse Now" in it as well: "We're so close to the source," Emmet says on a recovered videotape, sounding a little like Francis Ford Coppola's Col. Kurtz: "Physics break down, reality gets so much ... bigger."

As on an episodic crime procedural, "The River" seems poised to offer a series of discrete encounters with the otherworldly, written with a copy of "The Big Book of Amazonian Folk Tales" open nearby, as it goes along its long-arc way. This many minutes into a horror film, all the characters but one would already be dead, given the near-universal tendency to run toward rather than away from the loud crash or the rustling in the brush. (The fearless crew also includes mechanic Daniel Zacapa, his spook-sensitive daughter Paulina Gaitan, cameraman Shaun Parkes and taciturn security man Thomas Kretschmann.) But as this is television, there is some investment in keeping them alive.


THE RIVER
Where: ABC
When: 9 p.m. ET/PT Tuesday
Rating: TV-14-LV (may be unsuitable for children under the age of 14 with advisories for coarse language and violence)