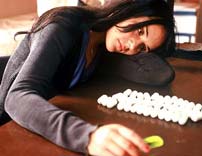 An uncommonly assured cinematic debut, Joshua Marston’s Maria Full of Grace tackles the world of Colombian drug trafficking through the eyes of a headstrong, 17-year-old heroine. Thrilling and vibrant, Maria is a nail-biter with a humanist bent.

Maria (Catalina Sandino Moreno), who is jobless and pregnant in her rural Colombian town, follows the promise of fortune by accepting a paid trip to New York City as a drug mule, carrying over 60 thumb-sized pellets of heroin in her stomach. Will she get caught? No, she is told. The ones who get caught just want to be famous.

In America, she finds murder, treachery, greed and maybe even salvation.

Maria Full of Grace, winner of the Dramatic Audience Award at Sundance 2004, chronicles a desperate criminal attempt at capturing a slice of the American pie. As the title indicates, Maria’s journey is fraught with an unspoken sense of divine providence.

Director Marston, a NYU film grad working almost completely in Spanish, has crafted a tense, almost painful work of neo-realism that succeeds in spite of moments of implausibility. Viewers with sensitive stomachs be forewarned; Marston pulls no punches in his depiction of the painful travails of being a human messenger of deadly cargo.

Newcomer Moreno, discovered by fluke in an acting class in Colombia, is a fierce performer, giving Maria the sense of measured urgency she uses to survive.

This is filmmaking of admirable simplicity, a completely non-sensationalized, non-judgmental portrait of a complex topic and a compelling story of a teenage girl trying to escape a limited existence by the only means she can find.