(The Weinstein Company)
By Sean Oliver 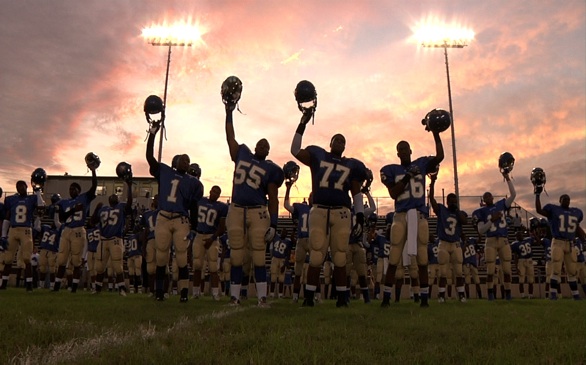 Team Photo of The Manassas Tigers on the verge of victory in Undefeated
(Credit: Dan Lindsay/TJ Martin/ The Weinstein Company)

Not since Hoop Dreams has a film been so in-depth and used such authenticity when it comes to exploring the world of amateur sports. Undefeated isn’t the usual heart-warming sports story about a down-and-out coach taking a rag-tag group of kids and instantly getting them to the championship. It brings something different to the sports film franchise, telling a real story of the disparity of wealth that riddles America.

Directors Daniel Lindsay and T.J. Martin didn’t want to just recreate the cliché story of the poor having their lives improved by the rich coming in and saving them. Instead, theirs is a documentary film about a community helping each other for the greater good. The directors explore the struggles of inner-city African-American youths growing up in a small town in Memphis, TN, an area that seems forgotten and neglected by the rest of America. Lindsay and Martin successfully paint a picture of how the despair of inner-city life can take away the hope of even the most focused and driven youth, and how a few brave individuals fight to overcome great odds using athletics as a means to escape poverty and deprivation.

The film takes an in-depth look at the local football team, the Memphis Manassas Tigers, profiling their quick-witted and larger-than-life workaholic coach, Bill Courtney, and three of his big-time players: the memorable, big-hearted leader, Montrail “Money” Brown, the bad attitude outlaw that wins you over, Chavis Daniels, and the superstar, college-bound, potential-All-American, O.C Brown, as they attempt to have a winning season at a school that can’t seem to break their losing streak.

The story centers on Courtney, a man who devotes himself to this football team, sacrificing time with his own family and his business. Courtney decides that this is the season the Tigers will turn around the negative record that has plagued them for over 100 years, a goal that challenges not only the school but the entire population of Manassas.

Courtney’s sacrifices turn the team into a family. He and his assistant coaches go above-and-beyond the call of duty, raising money for the team and making sure the students also stay focused on their academics. In one instance, an assistant of Courtney’s takes in O.C Brown and helps him prepare for the ACT, so he can receive a college scholarship and have a chance at the pros. In another sub-plot, Courtney helps the team’s renegade, Chavis Daniels, from making mistakes that could land him back in juvenile detention. He also acts as the voice of reason when Montrail “Money” Brown loses his drive to stay in school after sustaining an injury on the field.

The real story of Undefeated is not the team’s remarkable run on the football field, but the wins and losses in the true game --life. Undefeated doesn’t follow the cookie-cutter documentary format, with no narration and only very limited additions from the filmmakers (one being the musical score that was excellent and complemented the film nicely). Undefeated is a powerful and inspiring film –a true winner in its genre.